What’s the best tarot deck for beginners? We’ve rounded up our faves!

It can be difficult to choose which deck to get if you’re a beginner tarot reader. With so many on the market, all with distinct styles, which is the best tarot deck to start learning the tarot? The simple answer: get which one chimes with you. You’re going to be spending a lot of time staring at the cards, so you should like the look of them! There is no right or wrong way to learn tarot — like anything in life, the best approach is the one which works for you.

That’s the short answer, though. And as tarot is so complex, it really helps to have a guide as an entry point to this wonderful, mystical world. So with that in mind, here’s our breakdown of which decks are the best for beginners — no matter what your approach.

If you want a tarot deck that will give you the classic tarot card meanings, allowing you to get a full education before you venture deeper into the wonderful world of tarot, then look no further!

This is the quintessential tarot deck. Almost all modern decks descend from this one, and there’s a reason for that. Published in 1909, the Rider-Waite-Smith tarot (named for its original publisher, its creator, and its illustrator) brought tarot to the world. With beautifully illustrated cards laden with symbolism, this deck rejuvenated tarot and made it easy for everyone to read — yet still opening the door to deep mysteries and spiritual wisdom.

Basically, it was a bit hit. And it’s still the best deck for a beginner tarot reader today. It’s easy to work out what each card means as soon as you look at it, because the artwork is so clear and evocative. Everything on the card has a symbolic meaning, which means that every card has multiple connotations and interpretations. And because most tarot decks are descended from this one, the Rider-Waite-Smith essentially acts as a key to the world of tarot, the perfect starting point on a journey that will take you to wonderful places.

Thanks to the deck’s popularity, there are dozens of excellent guidebooks on the market that will help you learn how to read tarot. Our personal recommendation is Seventy-Eight Degrees Of Wisdom by Rachel Pollack.

If you want a quintessential tarot with a twist, the Modern Witch Tarot takes the Rider-Waite-Smith and remixes it for the modern world. This deck was designed by Lisa Sterle to be accessible to everyone, making it a perfect beginner’s tarot deck. We all want to see ourselves reflected in tarot, which is why Lisa ensured that the Modern Witch Tarot featured diverse representation. Each card has been reimagined, with modern technology taking the place of obscure symbols and objects that are no longer in common use.

That makes it a great grab-and-go deck — it’s easy to read, it’s beautiful, and it makes learning the card meanings a snap. And we’re not just saying that because we published it! There’s a reason that Lisa’s tarot artwork went viral online, which is of course how we at Liminal found her. The very first card she illustrated conveyed a feeling that so many people found relatable.

And isn’t that just what you need from a tarot deck?

Coming out in late 2021, the Mystical Medleys tarot is another Rider-Waite-Smith remix. This time, Gary Hall has fused the world of tarot with that of classic animation, recasting the iconic cards as original cartoon characters. Inspired by the cartoons of the early 20th Century, Gary wanted to create a tarot that was at once universal and unique. These colorful creatures practically jump off the cards, taking the reader into fairy tale realms, off to sea, and even to Hollywood and back!

As Gary used the Rider-Waite-Smith deck as his starting point, this deck is excellent for a beginner tarot reader — especially if you love the world of classic animation!

If you want a tarot deck on a certain theme that chimes with you, then these decks are a good place to start!

Crafted as a journey through dreams, The Cosmic Slumber Tarot is a vibrant debut deck by popular comic artist Tillie Walden. Tillie is fascinated by dreamscapes: the wild lands we travel to every time we close our eyes, and the enigmatic figures we meet there. Each card of this deck opens a window to the divine unconscious, so it’s great if you want to use tarot intuitively, as a way to learn more about yourself and your mind.

Another debut deck, this time from artist Alba BG, The White Numen tarot is set in an ancient land, where humans and animals are connected on a spiritual level. If you’re interested in shamanic practices and the origins of mysticism, this deck will transport you to another level of reality! It’s the artwork and the theme that really has to chime with you, so this deck is a great beginners’ tarot. Also, like most of the decks on this list, The White Numen features diverse representation, including LGBT people.

This pastel tarot deck reimagines the cards and adds intricate new symbolism. The Luna Sol Tarot is a great one for beginners, especially if you’re looking for a deck that will uplift you without sugar-coating everything. Each card in the Luna Sol deck is a deep-dive into meaning, but the approach is always positive, because even life’s toughest moments have something to help you learn and grow. For this reason, the Luna Sol is a favourite for therapists who use tarot as a form of counselling.

Because themes are so personal to the individual reader, it’s impossible to go over all the best decks for beginning to read tarot. So here’s a special shout-out to the themed decks we particularly enjoy…

Esoteric Tarot Decks: Taking It To The Next Level

Every tarot deck is laden with symbology because the tarot, by its very nature, is mystical. But there are some decks that are deeply esoteric — which is perfect for any beginner tarot reader who wants to peer into the Mysteries…

Created by infamous occultist Aleister Crowley, this tarot is another big’un. Created between 1938 and 1943, and published posthumously in 1969, the Thoth tarot deck is less intuitive than the Rider-Waite-Smith, but it’s absolutely fascinating, taking the reader to new realms of consciousness. Its publication intersected with the Age of Aquarious, when the New Age movement was really kicking off — which explains its meteoric popularity.

Crowley took everything he knew about religion, paganism, alchemy, spirituality, occultism, and all the weirdness of life, and poured it into this tarot deck. If you want a deck that will take your magical practice to the next level, this is it.

Last, but far from least, we have the New Chapter Tarot. Created by artist K. Briggs during a turning point in their life, the New Chapter Tarot uses the theme of change as a springboard to create a new interpretation of tarot. This deck features gods and goddesses from multiple cultures, and K. utilised history, mythology, and psychology to craft card meanings that are at once intensely spiritual and personally relatable.

It’s a great beginner’s deck for mythology lovers, or anyone going through a time of change in their lives. In the booklet, K. speaks directly to the reader, guiding them through whatever turning point they’re currently facing.

With all this in mind, it’s no wonder that tarot legend Rachel Pollack considers this deck “a new chapter in tarot itself!

“One of the qualities that makes K. Briggs’s deck truly the New Chapter in Tarot, not just for her life and our own, is the ease and grace with which she brings together imagery and meaning from both modern traditions—and then goes beyond them to create her own unique vision.

Previous tarot decks, and books, have always treated divination as things that happen to the subject of the reading.  Thus, we find a kind of passive fatalism in traditional fortune-telling.  The New Chapter puts the power back on us.  We face the challenges, we make the choices.  Together with the cards, we ourselves create the New Chapter in our own lives.”

Artist James R. Eads has a deep love for everything spiritual and occult, and he’s really blazing a new trail in the tarot world. His Prisma Visions deck is suffused with his vibrant impressionist art style, and each Minor Arcana suit is told as a story that lasts a calendar season. The followup, Cosma Visions is an entirely new structure of tarot, with new suits and an expansion of the Major Arcana. Maybe not a beginner’s deck, but definitely worth checking out once you’ve learned the tarot ropes!

Well, not really. Getting your first deck is just the first step on a long journey into the wonderful realm of tarot. Be sure to check out our blog posts on interviewing your tarot deck, how to do intuitive tarot readings, and an introduction to tarot symbolism. And most of all, have fun! Tarot is best when you enjoy it. 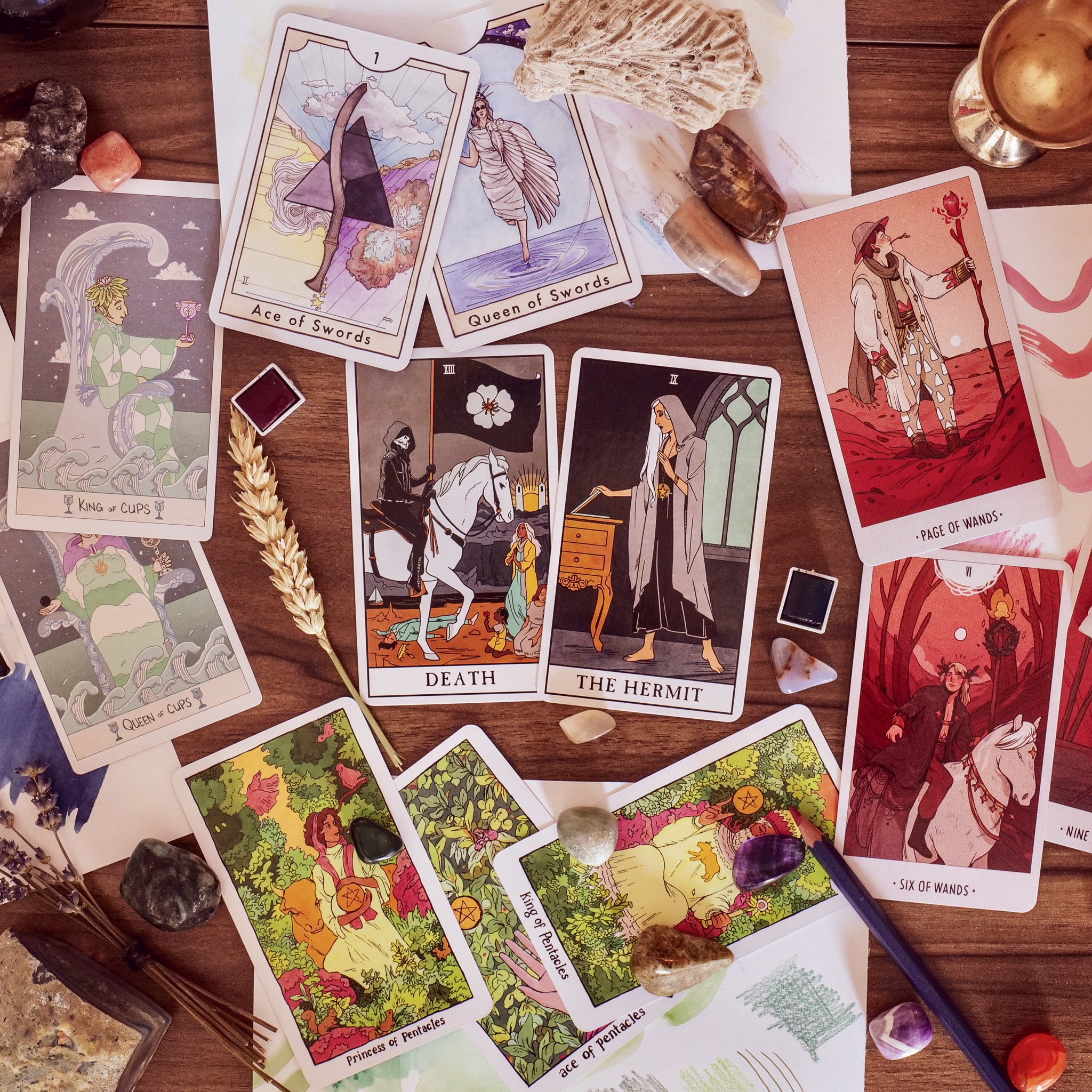