Join us on a journey through the rabbit hole to the world of the Mystical Medleys!

We’re super excited about the our newest deck: the Mystical Medleys Tarot. But just what is this take on the classic Rider-Waite-Smith tarot, and more importantly, why do you need to add Mystical Medleys to your tarot collection?

This season’s must have tarot deck, Mystical Medleys fuses tarot with vintage animation, resulting in scenes filled with whacky characters, saturated colours, and symbolism that transposes tarot to harmonise with the cartoons we know and love so well. By combining these two worlds, Mystical Medleys invokes ancient traditions with a modern and playful twist.

This is truly a unique deck, and it’s something tarot afficionados have never seen before — so it’s no surprise that those lucky enough to get their hands on early copies are going mad for it on Instagram. And what readers are appreciating most is how engaging and entertaining the deck is…

“This is fun! It makes me laugh, it makes me giggle.”

This is a trip to wonderland you won’t forget! While you’re there you’ll get acquainted with the larger-than-life characters that artist Gary Hall created for the deck. All the 78 cards are there, plus two bonus cards to round it up to a fantabulous 80 card deck! You’re sure to make good work of memorising these cards as you develop your tarot reading skills — which is made all the easier by Gary’s guidebook. Fun and approachable, this guidebook explains each card and will help you unravel key interpretations.

But what is the theory behind this delightful deck? We caught up Gary for a quick Q&A about the deck…

What do you mean by Vintage Cartoon?

The vintage style of this deck is inspired by cartoons of the 1930s, from which you’ll remember famous characters such as Bettie Boop, Steamboat Wally and many more. Although they were produced by different studios, all these cartoons have one thing in common, and that’s their “rubber hose” animation style. These early animations were extremely laborious and expensive to create, and remained as some of the few animations available to kids for years to come. But why does this period fascinate creator Gary Hall? He says…

“These were the films I grew up with, and the only way you could see them was if it was Christmas time. My school used to pop them on the projector! It was the same video every time, but it was worth it. You could also see them if you were lucky enough to go to the cinema. The VHS tapes of classic animations used to be so expensive (they were thought of as collectibles), so it just wasn’t possible for me to own them. So, I started collecting Asterix and TinTin books and I used to copy the drawings out of them.”

What was the process behind this deck?

There’s something very genuine about the vintage feel of the Mystical Medleys cards. They have that tactile quality along with a cleanness to the lines and colors that makes it feel it brand new and retro at the same time. It’s like we hopped in the DeLorean to pick up the deck fresh from the 1930s! And that was exactly what Gary was going for…

“I didn’t want to go down the route of using digital effects: I didn’t want to run the work though filters to achieve the look I had in mind. So I made all the brushes and halftones myself, and that way it didn’t look like everyone else’s work. I wanted to look like it was mine: not a copy of the past, but something new that is reminiscent of the past.”

If you love vintage cartoons, why make a tarot deck?

Gary’s interest in tarot stemmed from his fascination with symbolism, along with his love of cult classic cartoons — which are themselves laden with symbolism. He’s always been fascinated by the underlying messages coming though in the cartoons. For example, in Fleischer Studios’ Red Hot Mamma (1934), Betty Boop dreams that her flame-filled fireplace is a gateway to Hell — and she promptly descends into the underworld to perform “Hell’s Bells” for the Devil and his demons. From these occult references, Gary wanted to explore the symbolism of tarot and the messages the universe was trying to communicate.

“Before I even set out to create Mystical Medleys, I was making a deck just for myself, as a side project from my work so that I could learn more about tarot. I figured, what better way to understand the cards than to study them and then draw my own version? I shared these images online — and from there, Darren and Kay saw my cards and asked me if I wanted to do an 80-card deck.”

The Devil’s in the details…

The one card you won’t forget is the surprise waiting in the Mystical Medleys case, behind the magnetic flap… he springs out from the shadows, it’s the Devil! This cute yet sinister chap is Gary’s favourite of the cards, and he hopes you will find a soft spot for this occult classic with a modern twist!

“Like all good stories, it starts with the Devil. That was the first card I drew, and it set the deck’s whole aesthetic. I knew that if I could capture the cute rubber hose style with the most infamous of tarot cards, I’d be able to create the whole deck in a frivolous yet functional way. The Devil card is such a powerful image that even people outside of the occult world are familiar with it. I wanted my interpretation to be just as powerful, keeping all the hidden meanings yet appearing to be a long-lost cartoon from the 1930s.“

This deck is HOT HOT HOT!

The Mystical Medleys Tarot has reached #1 in Amazon’s fortune-telling list! A second edition printing is already being produced… and the deck hasn’t even come out yet! So, if you want to grab a first printing of this hot deck, make sure to get your order in soon for the Autumn release. We are so thankful for your support of artist Gary Hall and this cooler than cool deck!

You’ll be able to meet Gary Hall at Thought Bubble – Harrogate on the 13th November 2021 for signings at the Liminal 11 table.

We are certainly very excited for Mystical Medleys and can’t wait to get stuck in with the playful readings this autumn! We hope you enjoy it as much as we have making it come to life! But don’t just take our word for it… Order your copy here. 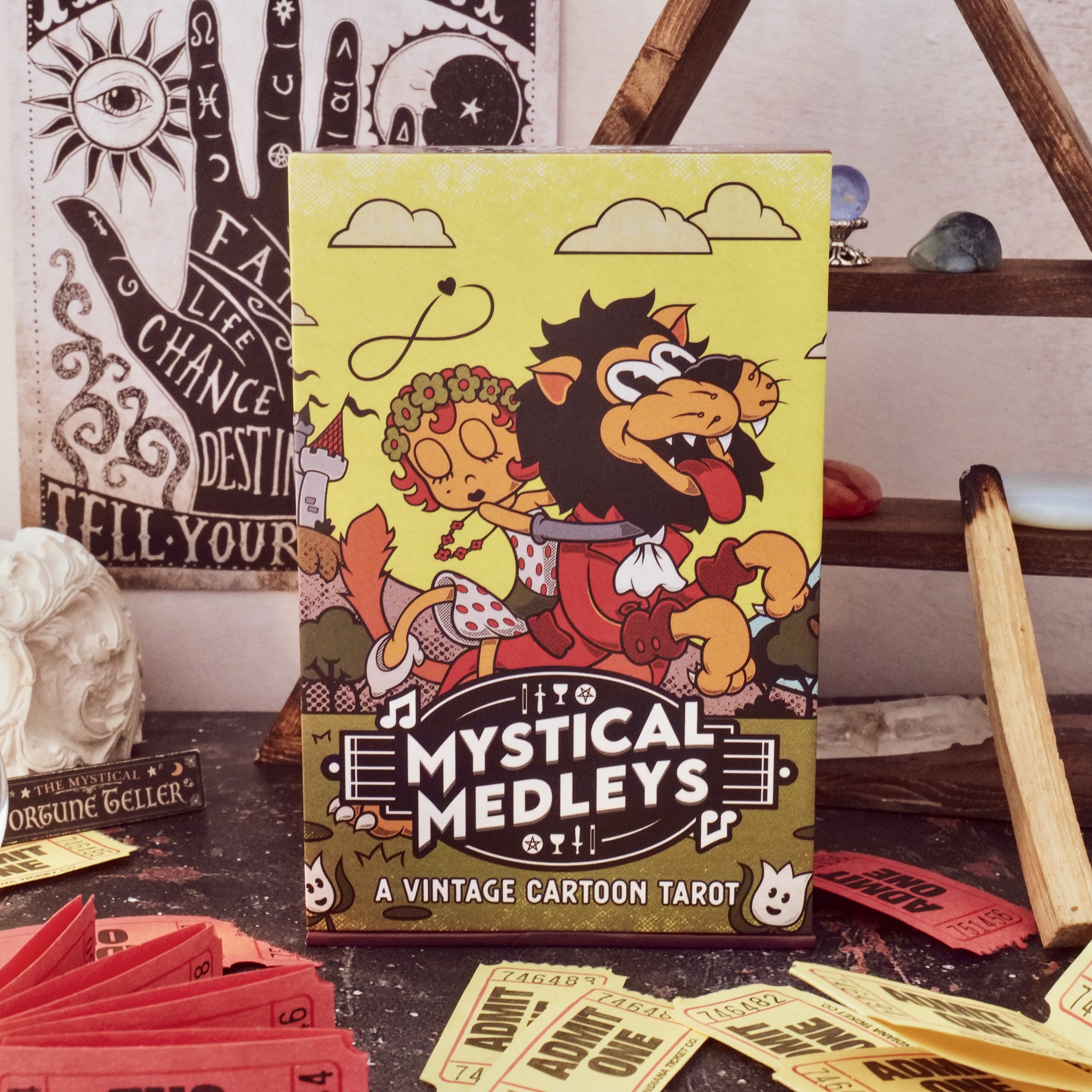