Loki can be anything and everything aside the kitchen sink (although to be honest, we wouldn’t put that past him), and is this year’s hottest god thanks to the highly anticipated arrival of Marvel’s series Loki. Played by the dashing Tom Hiddleston, in the MCU Loki is as much of a trickster as his divine namesake. But what similarities does Marvel’s Loki share with the Loki of Norse mythology? Crucially, is he genderfluid? Which his personal file certainly seems to suggest…

Of course, Loki doesn’t just appear in the MCU — he’s everywhere these days, from Assassin’s Creed: Valhalla to Neil Gaiman’s American Gods and of course his latest work, Norse Mythology. (We recommend devouring that one with a nice cup of mead!) For Pride month, we’re diving into the intersection of queerness and spirituality, and what better god to explore that with than Loki? So let’s dive in!

What do we know about Loki?

Why, he is (or perhaps we should say “they are”) the cleverest trickster god of them all! In Norse mythology, Loki is known for spending most of their days making clever remarks and getting the gods into trouble, especially Thor and Odin. However, they’re not all bad! They do spend the other half of their time getting the gods back out of trouble again, even if they are begrugingly forced to admit their mistakes. Most excitingly of all, Loki plays with gender more than any of the other Norse gods. Loki has been both a mother and a father in their time, as a masterful shapeshifter who transitions between the sexes as it suits them.

Is Loki genderfluid in Norse mythology?

Loki is fluid and changeable. This we know from Loki’s ability to go from one form to another as the mood takes them, usually as a means to outwit the gods, who have always mocked them for being different. In one of the most famous of Loki’s gender adventures, they suggest that Thor disguise himself as woman in order to retrieve his stolen hammer. Loki even poses as a handmaiden for Thor, and the mission is a success! This tale was definitely intended to be comedic, as the idea of the most manly of gods to dress up as a bride gave the Vikings a good old chuckle. And it certainly is a fun story!

But Loki’s relationship with gender goes beyond mere trickery, and into the realm of magic and wisdom. They have always shown interest in what strict Norse society saw as feminine attributes — and Loki crossing the threshold between rigid gender roles added to their divinity. For example, in the Song of Hyndla, Loki consumes the heart of a witch to learn her wisdom. Consuming the heart of creatures was, in Norse folklore, a way to embody them and take on their abilities. Loki specifically wanted to learn of feminine magic, and by eating the heart they became pregnant and gave birth to the very first female ogre. In the poem Loki’s Quarrel, Loki lives as a milkmaid for eight years. During that time, they were known as a witch, and give birth to many witches.

Interestingly enough, Loki has a connection to gay history as well. In another famous tale, Loki transforms into a mare and gives birth to the eight-legged horse Sleipnir. Nowadays, we just see this as a fun story, but at the time the Vikings would have understood it another way. You see, sex between men was pretty common in Norse society, and wasn’t necessarily stigmatised — unless the man in question was, let’s say, a receiver rather than a giver. This was likened to weakness (men could even duel to restore honour after this “insult”), and a slang term was given to these men: “agr”. When not used in this context, this word actually means “mare”, or female horse. And so the tale of how Loki transformed into a mare takes on another dimension once we know the social context.

Yet, Loki’s trickery was intended to save the goddess Freyja from a bad marriage, and later Loki gives Sleipnir to Odin, who uses the horse as his steed. Despite the connection to this disparaging slang term, the myth casts Loki in a heroic light.

“Loki’s relations with Svadilfari [the stallion] were such that a while later he gave birth to a colt.”

The Prose Edda by Jesse Byock

Clearly, Norse perceptions of gender and sexuality were different from our own. So can we claim that Loki is a genderfluid god? Nowadays, genderfluidity is an identity in and of itself, and there aren’t really any myths in which Loki asserts what gender they identify with. But that’s also because gender-identification is a modern concept. Within the context of the time, Loki very much exhibits genderfluidity in perhaps the most essential way, because they literally do shift between genders, and have been seen as both a man and a woman.

Pronoun-wise, Loki is usually referred to with male pronouns, and sometimes female, but never neutral. Of course, this is because Old Norse simply didn’t use pronouns the same way we do: sometimes women are referred to with masculine pronouns if the adjective describing them is masculine, and neutral pronouns seemed to refer to objects rather than people. In this article, we have used the neutral “they” to refer to Loki, because that fits with our current idea of genderfluidity — and, as the myths demonstrate, Loki is as genderfluid as you could get in the ancient world.

Is Loki genderfluid in Marvel?

In comic books, Loki’s genderfluidity has been explored recently in Loki: Agent of Asgard, where he (in this comic Loki’s pronouns change along with his gender presentation, shifting between he/him and she/her) often changes from being the God of Lies to the Goddess of Stories, becoming Lady Loki whenever she feels like it. Her shapeshifting is explicitly said to be tied to her self image — whatever form she is in, Loki is always Loki, “first, last and always.” (See Agent of Asgard #5 and #16 for more on this!)

Odin, in this same comic series, refers to Loki as “my child who is neither my son nor my daughter.” Other writers have continued this characterization, with series such as Vote Loki and The Unbeatable Squirrel Girl showing him changing his gender presentation, or making reference to his genderfluidity. While we have not seen Loki with pronouns other than he/him on the big or small screen yet, this may well change with the Easter egg in the upcoming Loki show making Loki’s genderfluidity canon in the Marvel Cinematic Universe.

Aside from Marvel, other popular media featuring Norse gods has also depicted Loki as genderfluid. In the Magnus Chase series by Rick Riordan, author of the popular Percy Jackson series, Loki is the mother of Alex Fierro, a demigod who also identifies as genderfluid. In this Loki predominantly presents as male, but it was confirmed in later books that gods in the Percy Jackson world often changed their physical sex according to their whims.

Loki has had a few partners throughout the legendary sagas, enjoying sex and using shapeshifting to try new and exciting things, and as a result has fathered a few children — and mothered even more! Loki’s first child is with their wife in Asgard, whom Odin and the gods approve of, but Loki also has a giantess lover in Jotunheim and has sired three famous children with her:

And of course, who could forget Sleipnir. The fastest horse in all the nine realms, in the MCU Odin can even be seen riding this horse in the very first Thor film! Which suggests that the movie version of Loki did indeed give birth to this mystical creature.

In terms of sexual orientation, then, we could probably safely say that Loki is fluid in that respect as well!

How does Loki fit in with tarot?

As a shapeshifter, Loki can move amongst the cards: they could play The Empress, The Hermit, and even the 10 of Swords, but most prominently they can be found in the Magician. The Magician, like Loki, is full of magical potential and creative prowess. With this power Loki has the almost endless potential to conceive ideas into reality though self-expression in whatever form or gender they wish.

Loki truly is full of confidence to be who they are regardless of the world around them. Loki is powerful, and the children they bore were sewn into the fabric of Odin’s fate, and the fate of the gods. Odin was foolish to treat Loki’s children so harshly, as in the end it became his undoing — a powerful message not to let fear cloud your kindness towards others. So, the next time you get The Magician think of Loki… and sometimes question if they are hiding in the form of another card that pops out when you shuffle (we all know those flying cards)! 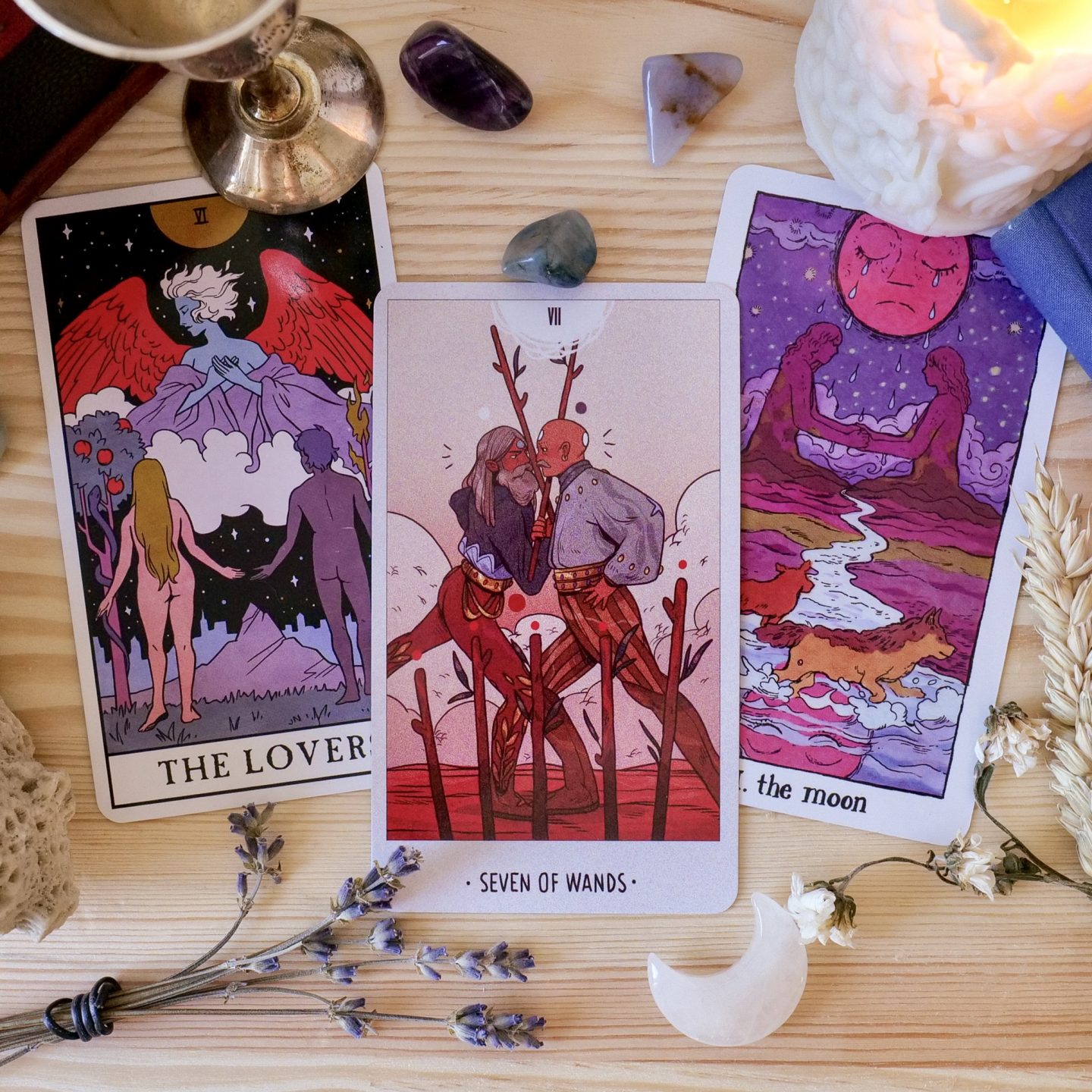 How Queer Identity & The Tarot Are Connected 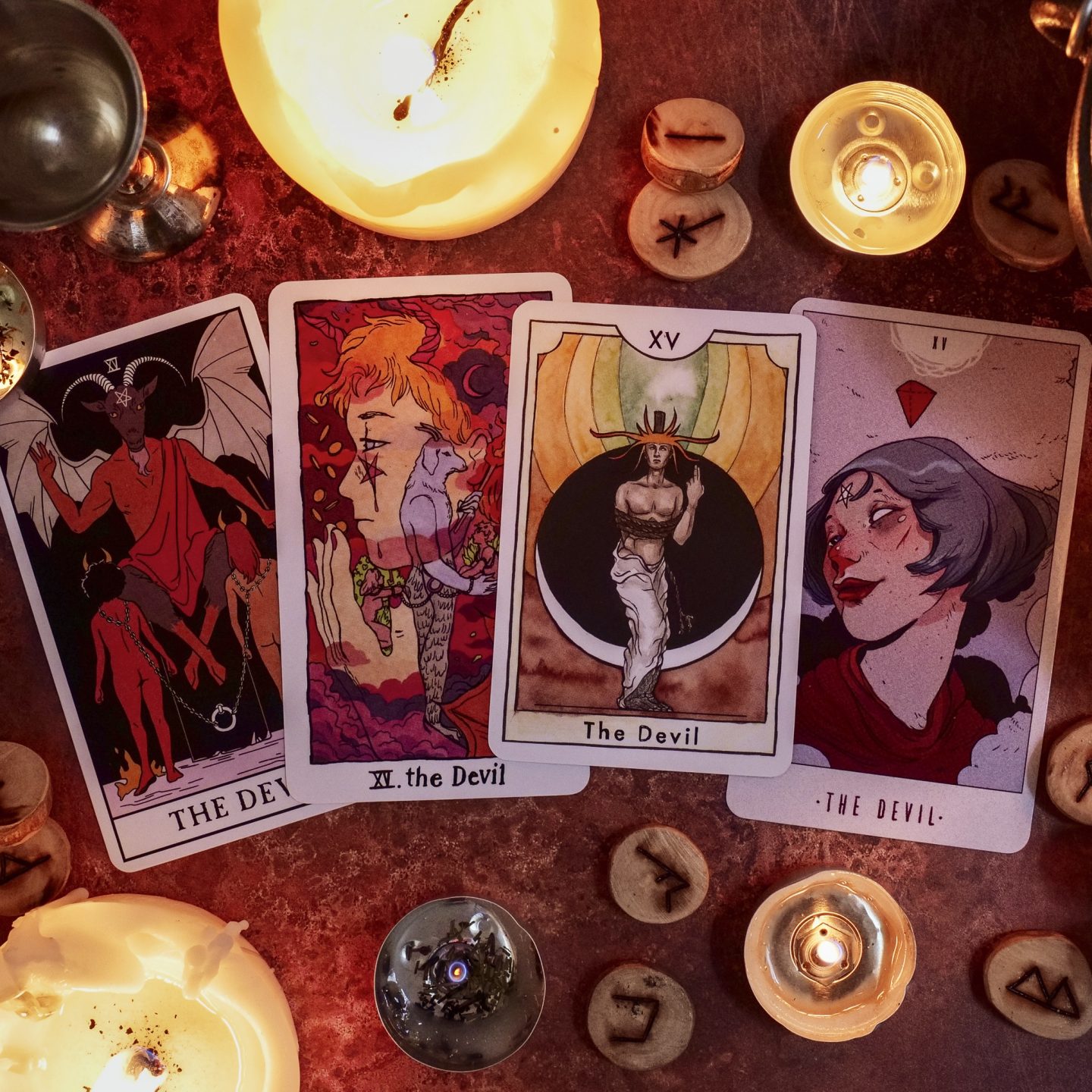