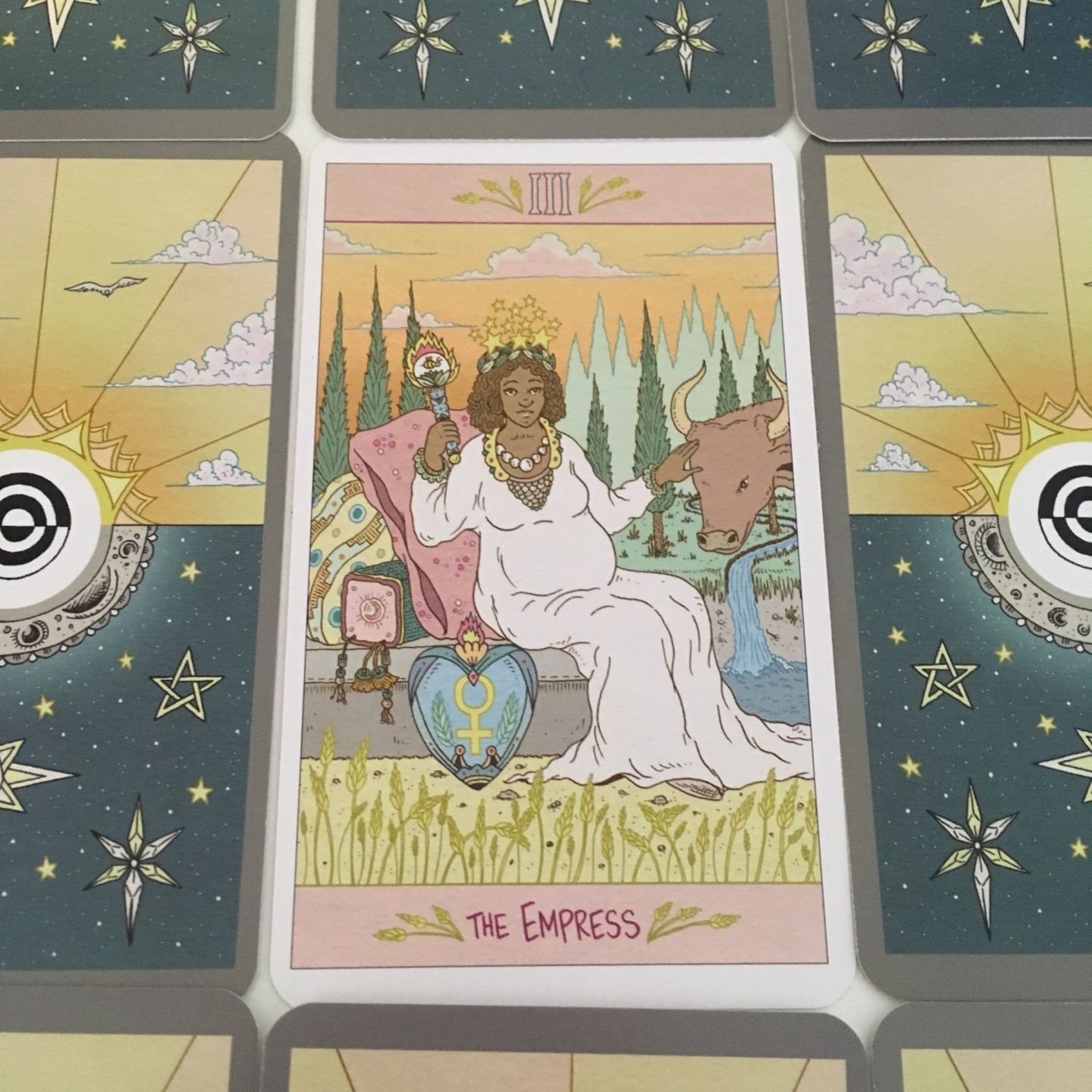 The Empress in The Luna Sol Tarot

We hate to admit playing favourites, but all tarot enthusiasts have a particular card that has a personal spark. For me, it is the Empress (Kay‘s is The Hermit and Sarah‘s is the Ace of Swords, although Temperance calls out often!). Had you asked me when I was a younger reader, no doubt I would have chosen something wilder or stranger, but over the years the warmth and compassion of the Empress has melted resistance away. Now she stands apart. 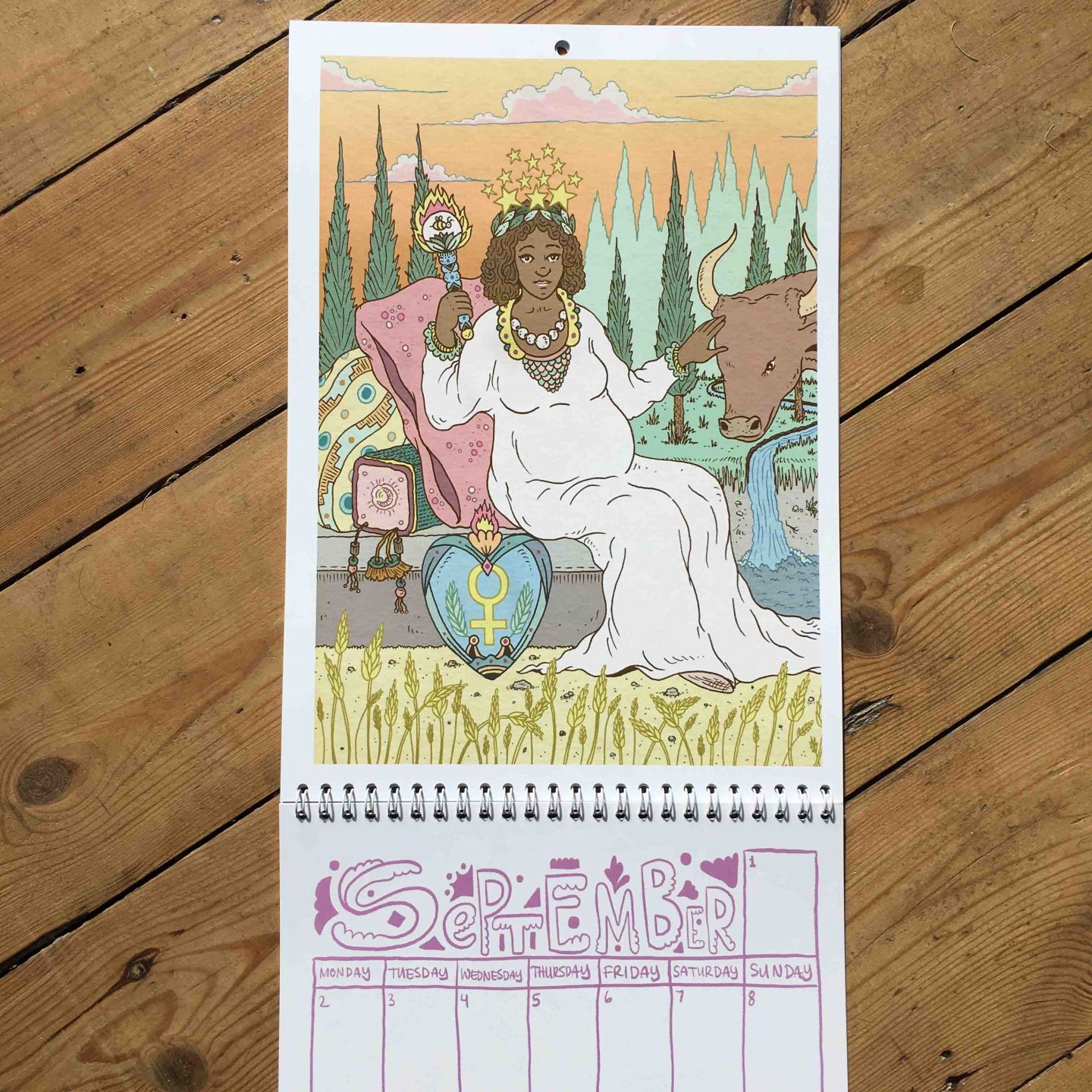 The Empress in the Luna Sol Tarot (as seen in our 2019 calendar!)

The myth most commonly associated with the Empress is that of the Demeter, the Greek Goddess of agriculture and fertility, and her daughter Persephone. Persephone was abducted by Hades and taken to be his wife and Queen in the realm of the underworld. Demeter became consumed with the need to find her daughter resulting in the seasons halting, growth of living things ceasing and the start of global famine. At the behest of Zeus, Hermes and Hecate, two deities associated with magic and known psychopomps, helped Demeter descend into the underworld. Hades agreed to the release of Persephone on one condition (always a tricky thing – see Orpheus and Eurydice), she could go providing she had eaten nothing whilst in his realm. Unfortunately a small handful of pomegranate seeds that Persephone has eaten meant that she was bound to return to the underworld for a few months each year,sometimes in the drought of summer, sometimes in the autumn or winter. Several festivals and initiation rites were connected to this myth. Most famously the Eleusinian Mysteries which were open to all classes and genders. The other was the Thesmophoria festival, which in reflection of the strong feminine energy of Demeter, was permitted for women-only. 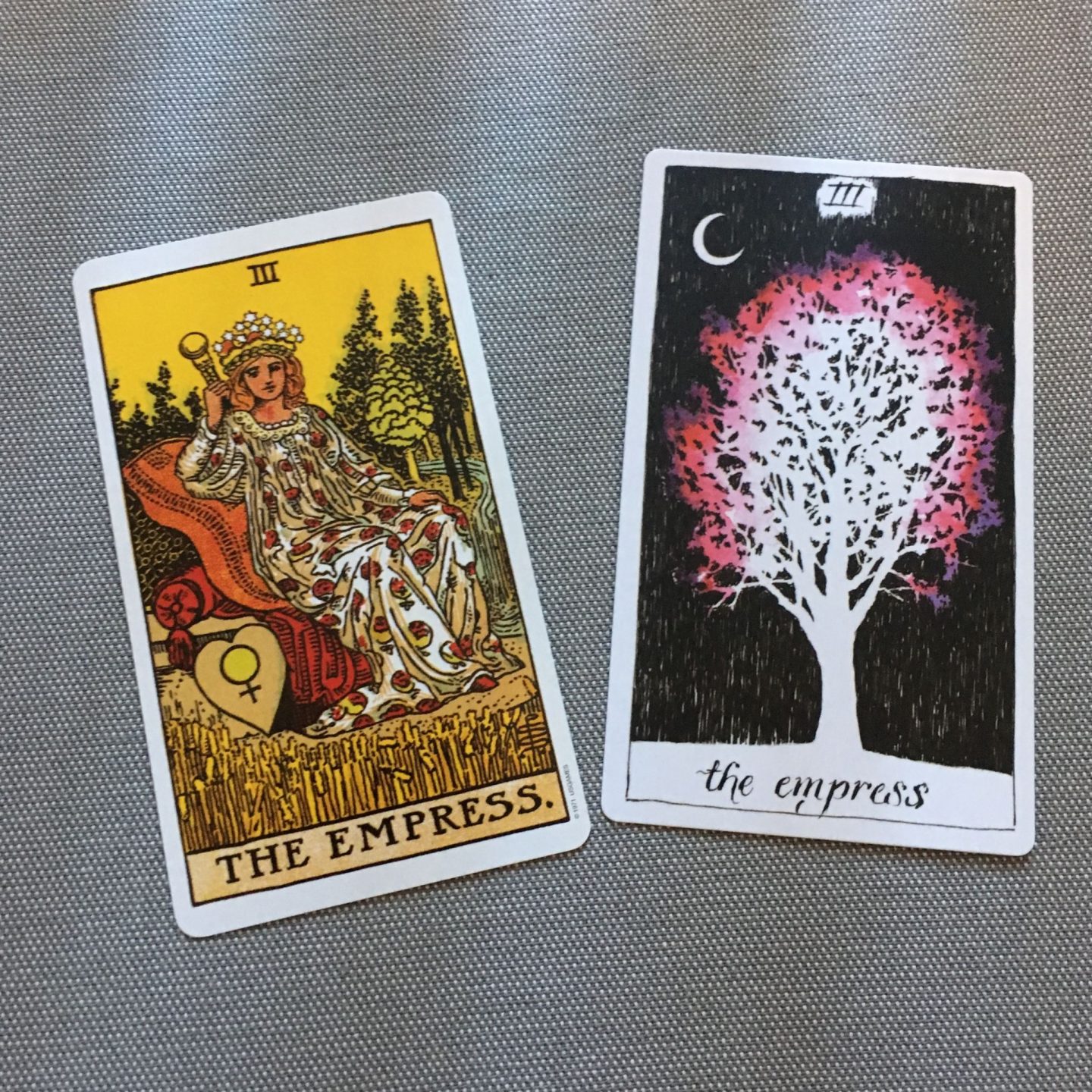 The Empress card in the Rider-Waite-Smith, and a more modern interpretation from The Wild Unknown deck

The Empress in the tarot is empowered with a very similar feminine essence as Demeter. Note the corn symbolising agriculture, which Demeter ruled over (the “Corn-Mother” was one of her titles). In the Luna Sol the Empresses is carrying a child, motherhood also being a principle theme of Demeter. The shield inscribed with the symbol of Venus shows the protective power of her love and compassion. There is strength in that protection and you would do well not to test it – again reflected in Demeter halting the seasons to find her daughter. She is also a person of empathy. Notice how when the cards are laid in sequence in the Luna Sol tarot The Emperor looks back to The Empress but she looks out at you.

The Empress connects and understands in a way the Emperor does not. For those that have seen the full Luna Sol Tarot deck, you may have spotted that animals make an appearance in all the Major Arcana. But it is only in three that a person makes connection with that animal – of course The Empress is one of those three, showing direct, gentle empathy. 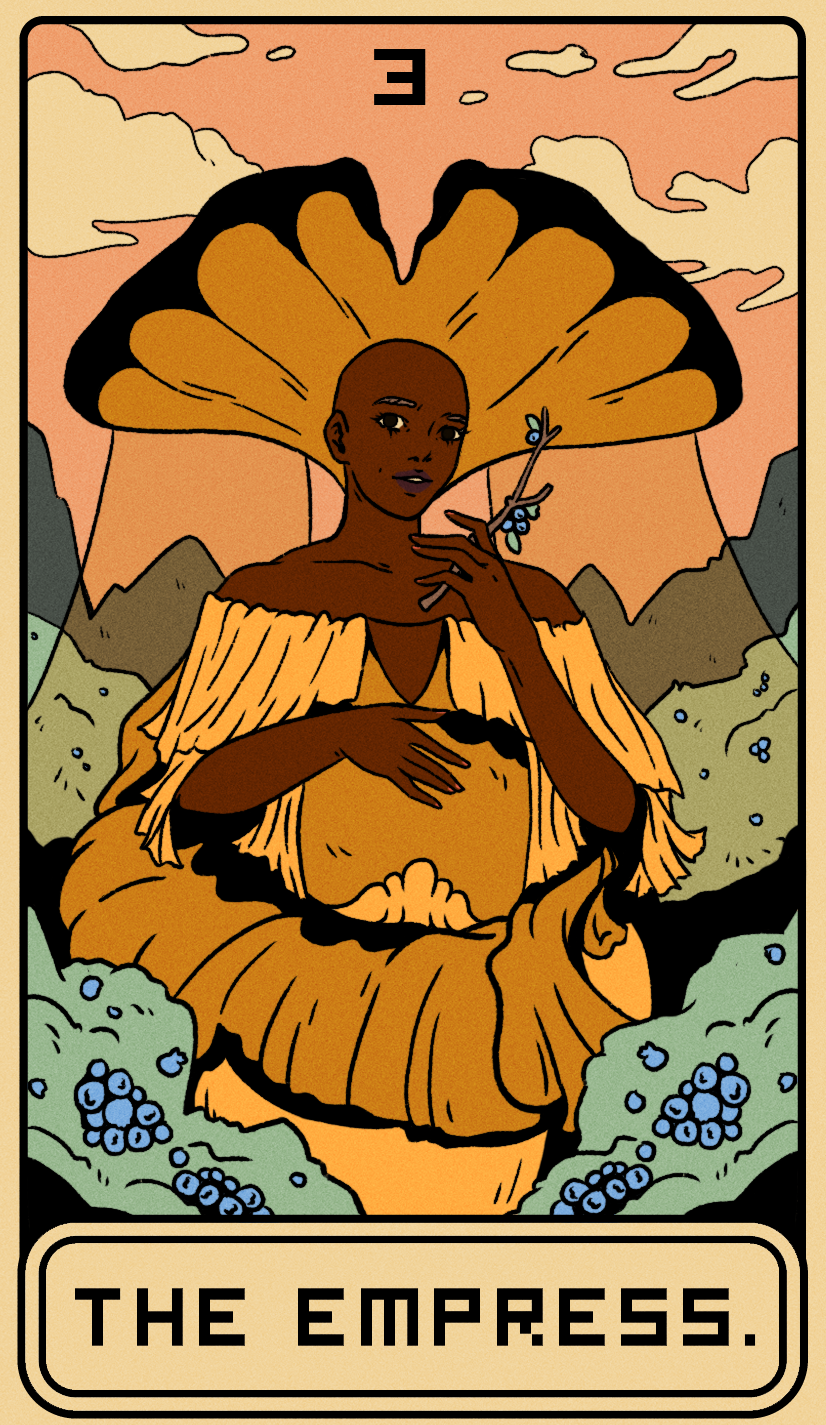 The Empress from Kaylee Pinecone‘s webcomic Tales of the Tarot – read it now!

I consider it a blessing when The Empress appears in a tarot reading. If she is with you, how fortunate! If the cards hint you need to connect with her compassion more, then how sweet the lesson!

Seek what needs your nurture, empathy and care. Self-sacrifice in the aid of others may be required. 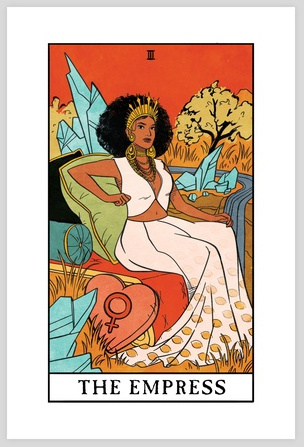 Lots of exciting stuff has been happening at Liminal 11 headquarters! Tales of the Tarot is now in its fourth chapter, starring The Empress – how appropriate! A new instalment goes live every Wednesday, so look out tomorrow! Our Luna Sol Tarot deck has been out in the world for a good several weeks now, and we’re so happy to see that it really seems to be resonating with people! Check out some of the love we’ve had so far.

And THIS WEEKEND, we’ll be at Holistic and Mystic’s Mind, Body, Soul & Wellbeing Festival. It’s November 17-18th in Kempton Park. Hope to see you there! 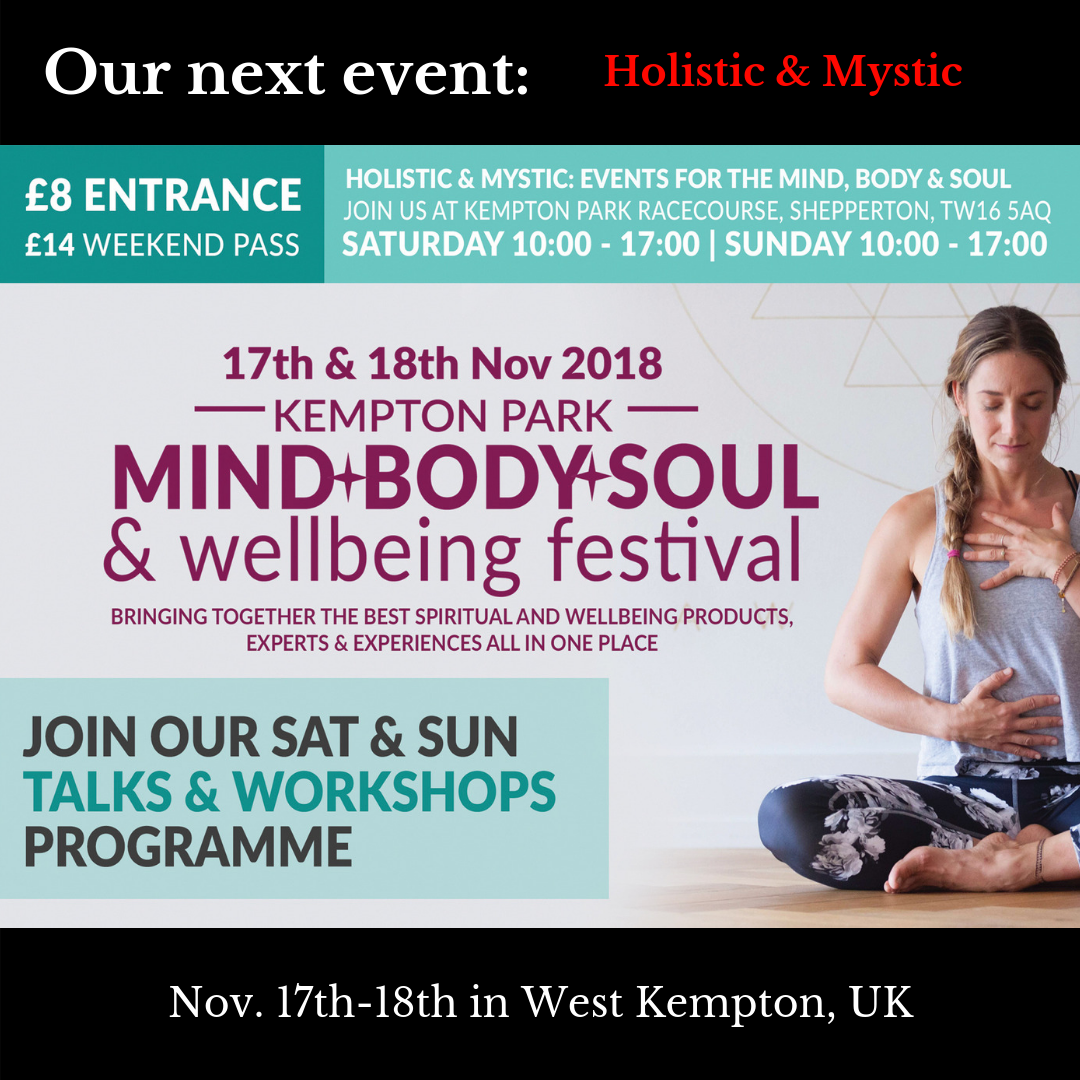