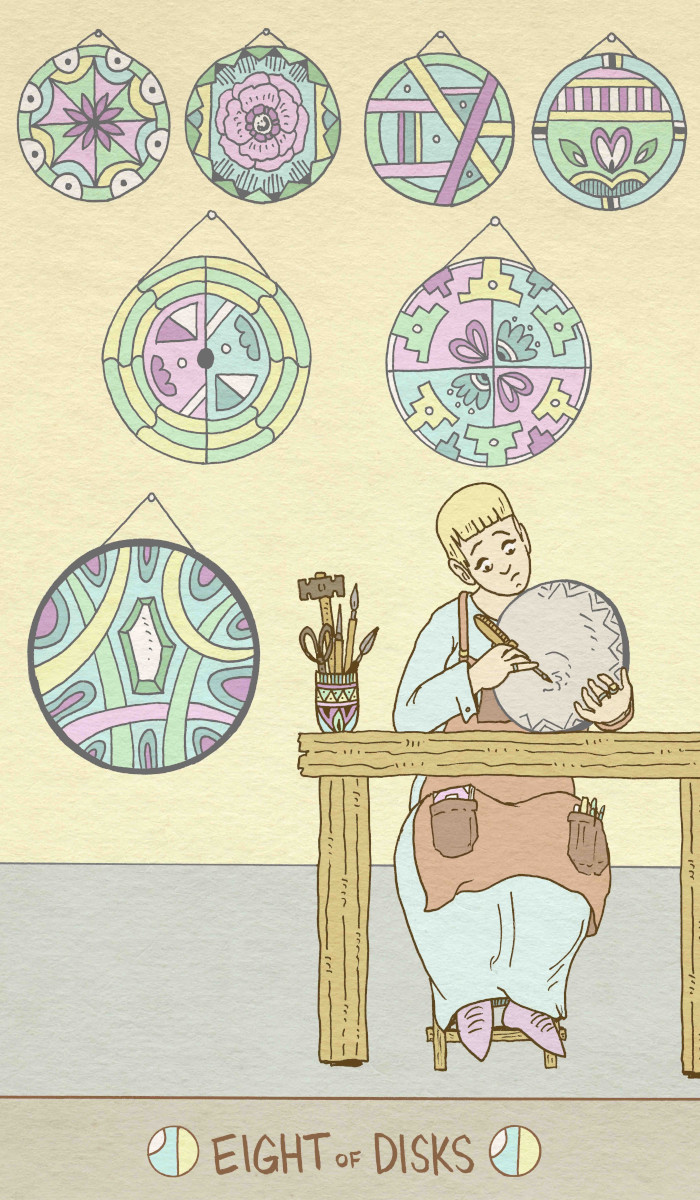 The Eight of Disks in the Luna Sol Tarot

With the Sun in Virgo and The Luna Sol Tarot being delivered from the printers, what finer time to reflect on that busy Minor Arcana, the Eight of Disks.

Compared to the Seven of Disks, which we covered in a previous blog post, the Eight of Disks delivers a much less ambiguous message – now is the moment to be industrious! The Luna Sol Tarot show this as an artisan decorating discs to be hung on the wall. The Waite-Smith shows someone chiselling pentagrams onto discs that are then nailed onto wood. There is craft here, much like the Three of Disks, but it is also something of a production line. The task demands time but also mental focus; good job then that the 8’s are in the Qabalistic sphere of Hod, with all it’s strong intellectual capabilities. What might daunt some will not daunt you when this card is drawn! 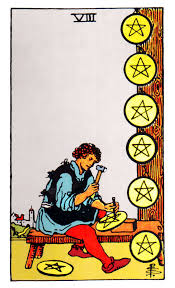 The Eight of Disks in the Waite-Smith deck

This isn’t an impulsive card like last week’s Fool. It’s earthy Disks suit gives it some serious grounding and a sense of patience. The key word applied in Crowley and Lady Harris’ Thoth Tarot is “Prudence”. So yes, get on with the job, but give yourself time to be conscientious, rushing will always be counter-productive in the Eight of Disks. 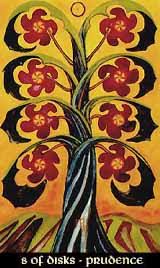 The Eight of Disks in the Thoth Tarot – “Prudence”

With dedication to the task so much can be achieved right now. Focus, keep an eye on the detail, and success is guaranteed.

What lies in the cards for Liminal 11?

With so many of Liminal 11’s works returning from the printers (and looking incredible!!!) and our festival line-up soon commencing, I can personally relate to the busy energy of the Eight of Disks.

As mentioned in last week’s blog, we start with the amazing Thought Bubble in Leeds on 22nd-23rd September. Always such a wonderful event – a chance to see so many new publications, catch up with friends and make new ones.

Our launch party at the fantastic Gosh! Comics in the heart of London’s Soho won’t be too far behind on 11th October. This will be great chance to see all our works in a beautiful store with Kay Medaglia of The Luna Sol Tarot (and co-founder of Liminal 11) and Sarina Mantle of Women + Patterns + Plants on hand for signing.

Kay will also be doing a signing event at the UK Tarot Conference in London on the evening 19th October. Liminal 11 will have a table there all day on the 19th-20th October. This event, just brimming with incredible talks from amazing people in the tarot world like Benebell Wen and Rachel Pollack, always sells out – so book soon!

Finally, we have just added a new event in November; the Holistic and Mystic Festival in Kempton Park on 17th– 18th November. As well as having a table there, Kay will be running a workshop on the practice of using drawing in mindfulness; a session that will be both fun and highly inspirational.

Here’s a full list of the events Liminal 11 has lined up for remainder of 2018. Please come say hello!