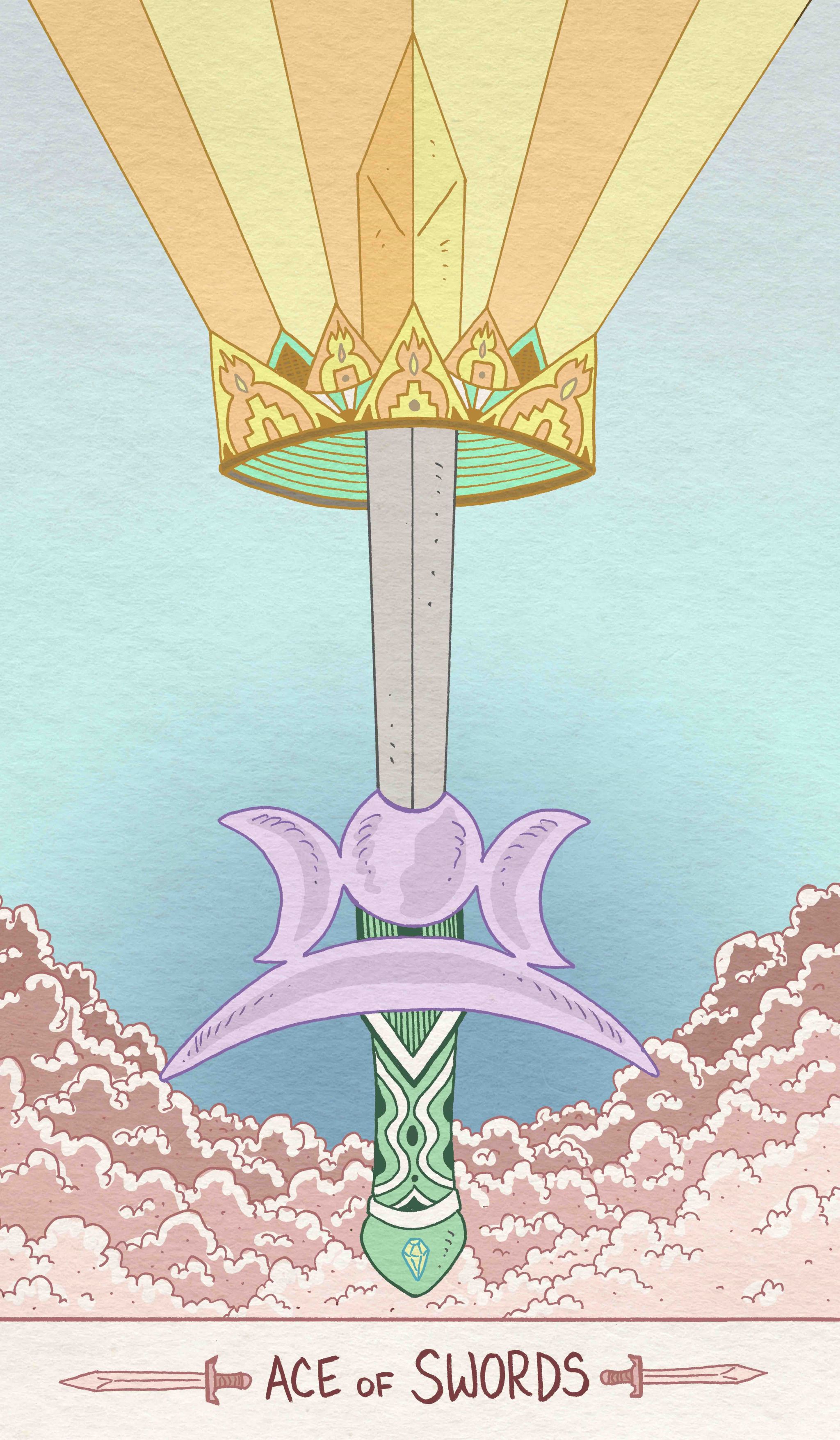 The Ace of Swords in The Luna Sol Tarot

The Ace of Swords is a personal favourite of mine – one of those cards appeared in my earliest tarot readings, at exactly the moment I needed it to, and has appeared often since. It feels like something that’s connected to me at least for the moment. Frankly (and maybe a bit weirdly!) it feels like my card. It’s the first card I go looking for when I’m checking out a new deck. Usually identifying more with the watery emotions depicted by the cups suit (I am a Pisces, after all!), it’s necessary to come up for air from time to time and get some clarity. It certainly was for me on my 30th birthday, when I gave myself a reading while in a bit of a rut, and it has served as inspiration and reminder that, if I try, I can easily see what has to happen and, crucially, I already have all of the tools within me to set off on that path. 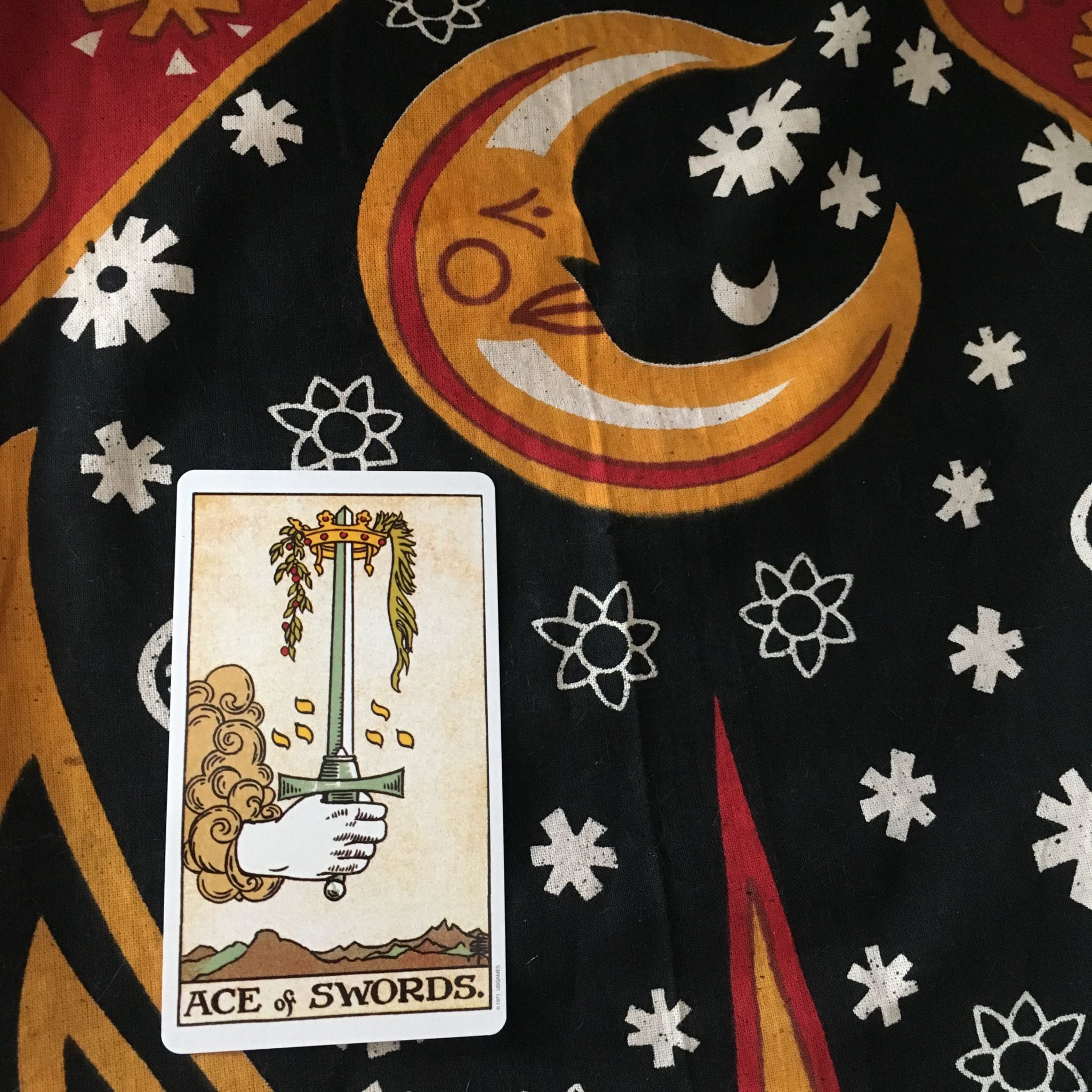 According to Kim Krans, whose Wild Unknown tarot I’ve been enjoying for quite a while now, ‘When lightning strikes, the whole world seems to light up for just one second. It’s as though you can “see everything,” and this vision lingers on even through the storm.’ 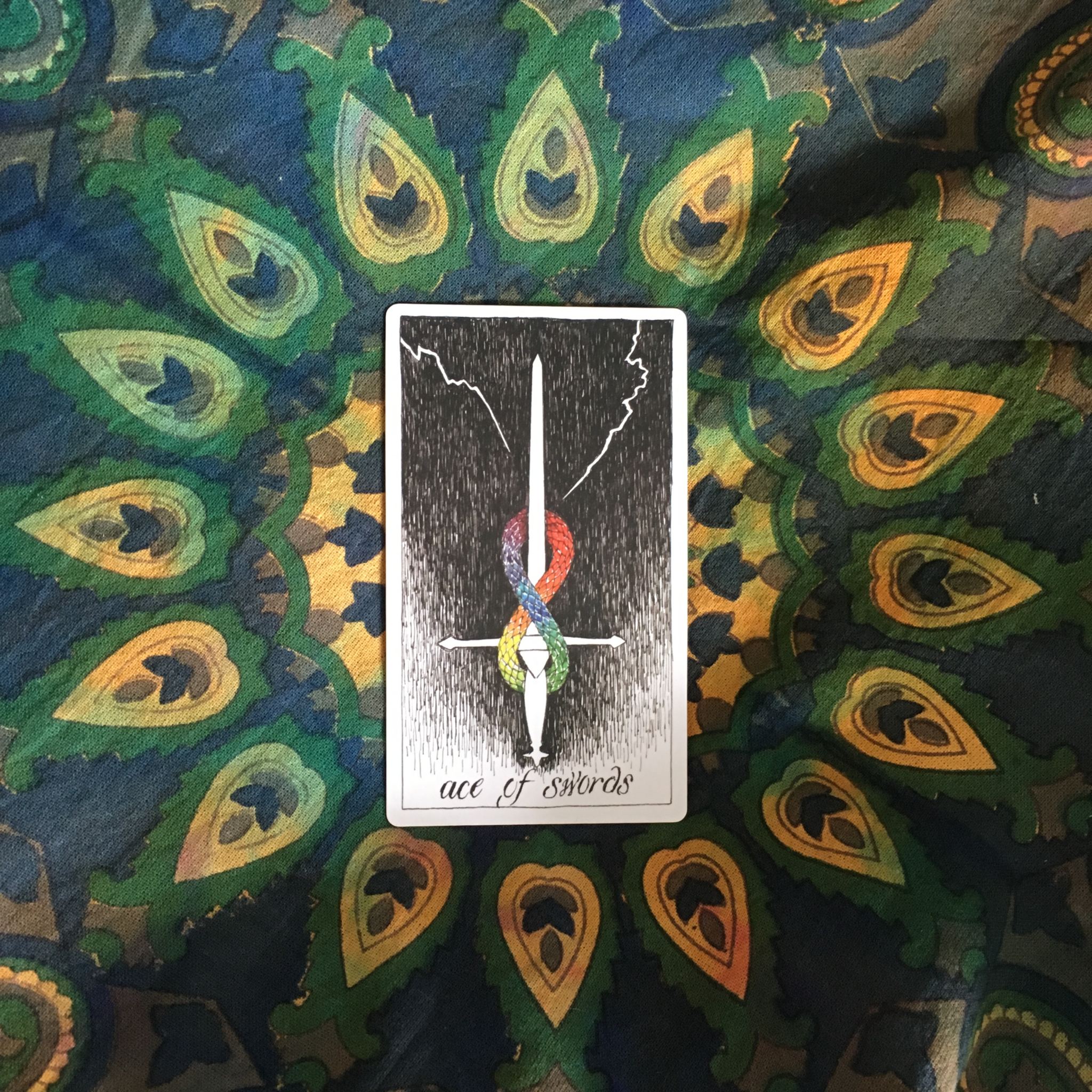 The Ace of Swords comes with a breakthrough of mental clarity – you know what needs to be done. But, as Michelle Tea puts it in her excellent Modern Tarot, this is a ‘mentally rigorous’ card, one that points toward justice or making a decision of right vs. wrong. You may not like the work that has to be done, but the auspicious Ace of Swords says it’s time to do it – it’s time to make your stand and do what’s right (for you, for someone else, for your work, for your relationships). While you may be bringing unwelcome conflict into your life, you can rest knowing you’ll feel relief in making the right choice. You’ll develop character; you’ll build strength.

In The Luna Sol Tarot, Kay Medaglia has taken the traditional themes of the Ace of Swords. You can see the sword floating in the air, as if part of the clouds. The crown shines light, indicating clarity and victory. But Kay brings a certain warmth to the card – it just feels more positive than the RWS version, with its barren mountainous landscape indicating cold intellect. Here, the sword rises above in a victorious manner. It’s almost as if it has been pulled out of a stone and its power is radiating outwards.

The Ace of Swords in The Luna Sol Tarot deck

Kay also adds beautiful detail to the hilt of the sword and the crown on top of it. Every space is adorned with patterns evoking fire and earth. A tiny diamond is embedded within the pommel. And the top of the hilt shows the thematic shape of the moon, which appears to be rising over a horizon. It’s a unique manifestation of a card that is rife for many varied interpretations!

Mental clarity, breakthrough, power. You can see what you must do, and little can stand in your way.

Thanks for stopping by! What are your favourite incarnations of the Ace of Swords? How do you feel about this card? Let us know what you think in the comments of find us on Instagram, Twitter and Facebook.

If you’ve enjoyed Sarah‘s thoughts on the tarot and want more from her, you can read about her early days with the tarot here and her recent progress here.