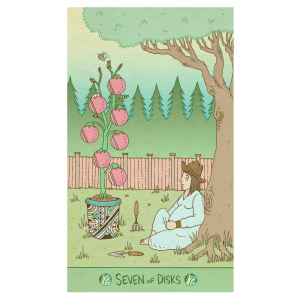 The 7 of Discs in The Luna Sol Tarot

Amidst the height of summer, when we slow through necessity and often enjoy a break from toil, what finer card to reflect on than the 7 of Disks? Those fruitful Disks and gardening tools suggest that this respite did not happen by chance, some work and a little planning probably brought you to this stage of achievement. The card suggests you should take stock of this moment; be present and look around. If we constantly move from task to task where is the reward in life or, perhaps, when do we get a chance to be grateful for those rewards. 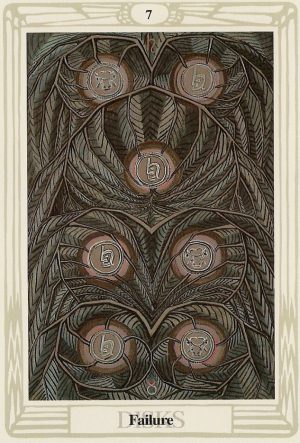 The 7 of Disks from the Thoth tarot

One deck that takes a very different view on the 7 of Disks is Lady Harris and Aleister Crowley’s Thoth tarot (pictured above). Lon Milo DuQuette’s description of this card in the Thoth is, “When the Seven of Disks shows up in a tarot reading, you better hope your question was ‘What’s going to happen to my worst enemy?'” Sounds harsh, but then Crowley did call this pip card ‘Failure’. Why so dark, when all appears well in so many other decks? The Thoth Tarot takes quite an astrological view of the pips, combined with a sense of the Quabalah. Here, in the 7 of Disks, it is Saturn in Taurus, in the Quabalah sphere of Netzach. If that looks like we are talking two languages at once, I know what you mean… so let’s think of Netzach as containing an aspect of Venus. So it’s Saturn in Taurus with a Venus influence. Saturn’s dark, heavy presence in the earthiest of Earth signs, coupled with the mild and mellow influence of Venus. Clearly this was in mind when Crowley’s said of the 7 of Disks that, “…everything is sunk in sloth.”

There is a strange energy about the 7s. They are some distance away from that primal meaning of the Aces, without having reached that sense of completion you see in the 9s (see our earlier blog on 7 of Cups to see how this plays out in the Cup suit). None of the 7’s are, to my mind, what you would call terrible cards, but, depending on what other cards accompany a 7 in a spread, it is quite easy to see their negative side.

For me, however, the 7 of Disks is a quite beautiful card. I think its message of being kind to yourself and accepting a reward is very relevant in a frantic, over-stimulated 21st Century. As Kay Medaglia’s Luna Sol Tarot suggests, lean back against a tree, enjoy what is good about your life and maybe reflect with an element of gratitude, seems no bad thing. Relax! You’ve probably earned it.

Step back from your work. Take time to enjoy a sense of achievement and rest. Review how worthwhile your endeavours are.

At the time of writing, there are a few tarot Kickstarter campaigns which are still running that have a healthy following:

The Children of Litha Tarot Deck by Alexandria Huntingdon has a lovely colour palette that makes the fabulous art seem to glow. Great to see someone with a comics background producing this lovely deck! 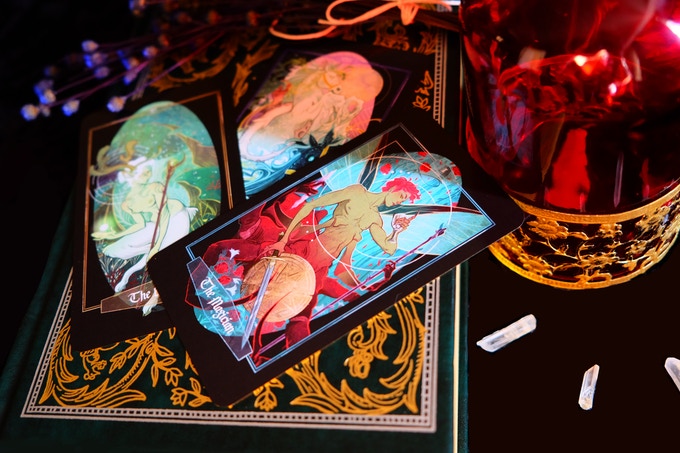 The Children of Litha Tarot deck

The Majestic Earth Tarot: Storm and Wonder by J.D.Hildegard Hinkel takes nature and landscapes as the central means to communicate the tarot, using paintings from the late 18th to early 20th century. Given the variety of artists used, the deck is wonderfully unified and certainly worth a look. 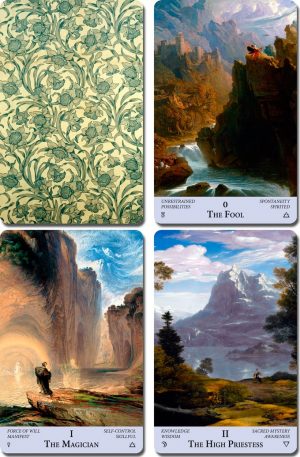 Lastly, The Light Seer’s Tarot and The Muse Tarot are two decks run in the same campaign, both created by Chris-Anne. The Light Seer’s Tarot explores a modern reflection of light and darkness within the tarot whilst The Muse Tarot works with feminine creative energy replacing the suits from Wands, Cups, Swords and Pentacles to Inspiration, Emotions, Voices and Materials. Both decks look great and deserve the success they are having! 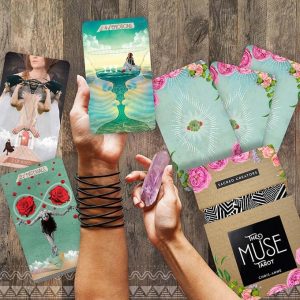 As always, we’d love to hear what you think – both about the 7 of Disks in the Luna Sol Tarot, and about some of your favourite Kickstarter decks. Have we missed anything? Let us know in the comments, or find us on Instagram, Twitter and Facebook!