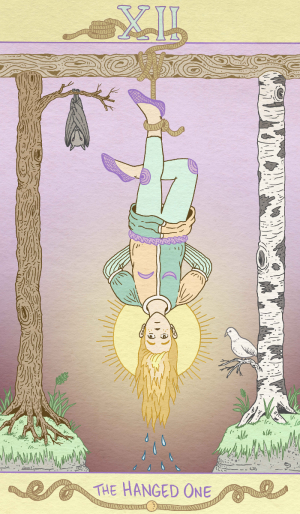 The Hanged One in the Luna Sol Tarot

The Hanged One in the Luna Sol Tarot

There is a myth that is often repeated when discussing The Hanged One, and that is Odin’s suffering upon Yggdrasil, a giant ash tree known as the World Tree.

Yggdrasil’s upper branches support Asgard, home of the Norse Aesir gods and goddesses, of whom Odin is All Father. Its roots grow from the Well of Urd, a pool of unimaginable depth in which reside some of the cosmos’ most potent forces and beings. In these depths live the Norns, the three maidens with the power to weave fate through means such as the runes that they carve on Yggdrasil’s trunk. Odin had noticed this power and wisdom and sought it for himself. With his side pierced by a spear he hung from a branch of Yggdrasil and looked down into the fathoms of the Well of Urd, calling and longing for the runes. After nine torturous days and nights, where no water passed his lips, his sacrifice was finally accepted and the knowledge of the runes was revealed. A god of the gallows indeed! 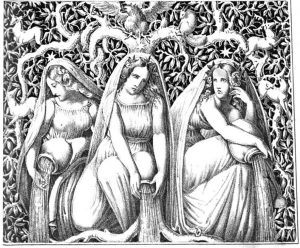 There is a verse in an old Norse poem from the Poetic Edda that connects so strongly to the tarot’s Hanged One, where Odin describes this sacrifice as being “given to Odin, myself to myself”. He is describing how, through the process of suffering and giving of himself, he was developing his “higher” self. It was ultimately a sacrifice of this self as much as the Well.

Now, look at The Hanged One in the Luna Sol Tarot. The ash tree to the person’s right, hair dripping with water from a source below, a face in as serene but focused meditative state, illuminated behind with revelations. The Hanged One gives and gains in this ordeal and, as uncomfortable as it is, it is a transitional state; it is liminal. What comes out of this initiation is not the same as what goes in. 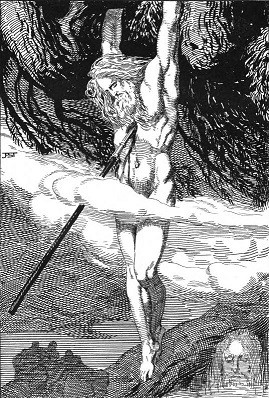 No life is free of suffering and it is usually not consciously self-imposed, unlike Odin’s trial on Yggdrasil. But what the Hanged One points to is that sometimes these experiences can lead to an inner re-birth, a life more fully lived.

If something in The Hanged One resonates with you, then might I suggest reading Chapter 3 – The Fires of Initiation from Jack Kornfield’s After the Ecstasy, The Laundry. I will end with a quote from there made by Carl Sagan, “I recommend almost dying to everybody. It’s character building. You get a much clearer perspective of what’s important and what isn’t, the preciousness and beauty of life.”

Be prepared to make sacrifices but know that ultimately they will be of benefit. Just as the Hanged One views the world upside down, study matters from a different perspective to see where the truth lies. Now may be the time to value inner development.

What do you think of Kay‘s interpretation of The Hanged One? We’d love to hear your comments! Be sure to find us on Instagram, Twitter and Facebook, and sign up for our newsletter to hear when pre-orders open for The Luna Sol Tarot!