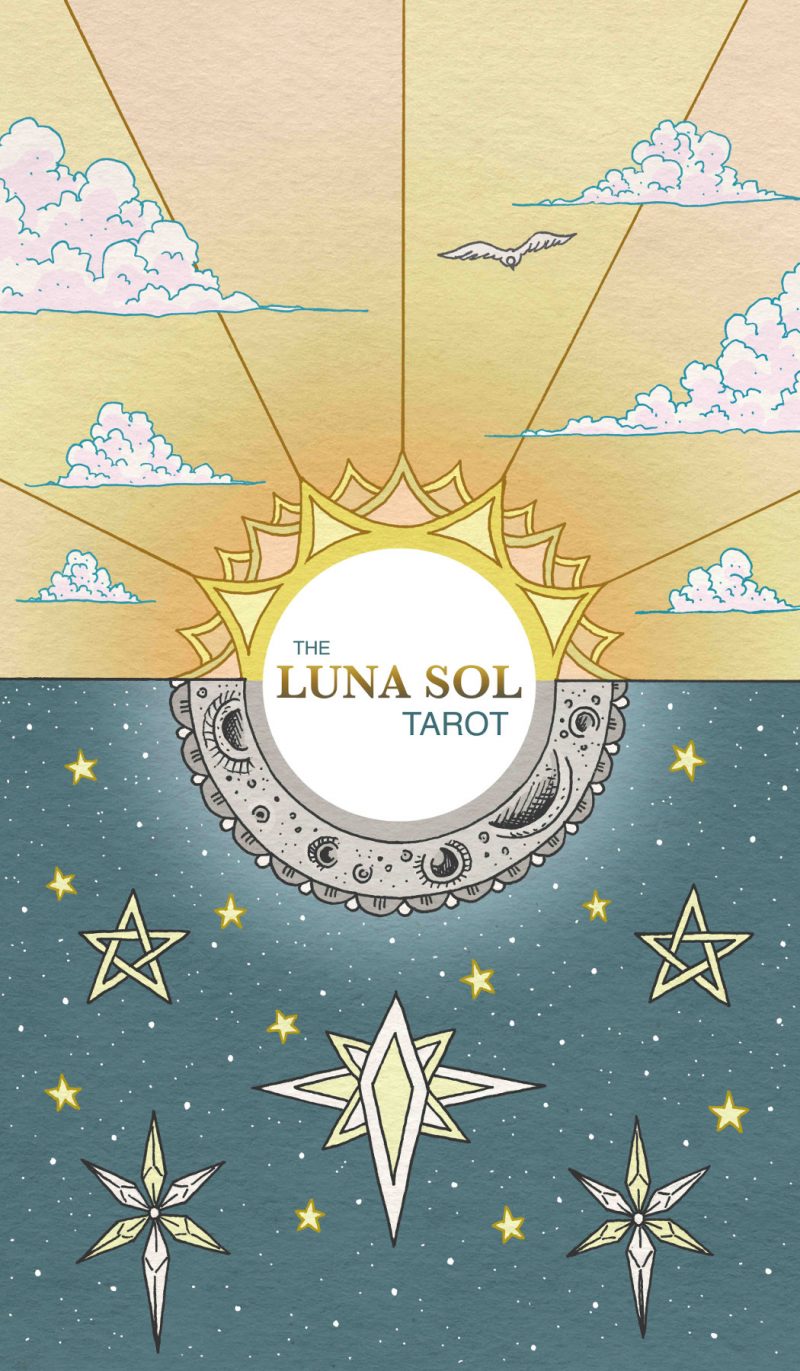 At the time of writing this, I have been completely done the artwork for the Luna Sol Tarot for about a month. I feel just enough recovered from the emotional labour to begin to reflect on the process!

I just completed the 78th and final card for the Luna Sol Tarot. What an adventure…. pic.twitter.com/T4F9g4sTnR

From beginning to end, the drawing, inking and colouring of the 78 tarot cards took me almost exactly five months. This, I recently found out, was the same amount of time that Pamela Colman-Smith took to draw her iconic deck! However, I completed at least two months of research at the end of 2017 before I was able to actually start start drawing the images.

Here is a selection of my notes from the sketchbook I kept and filled entirely with prep for the deck: 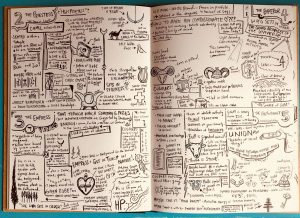 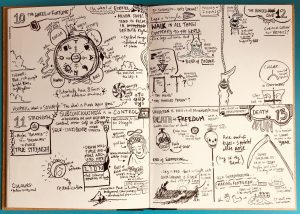 To go back to the beginning, for a minute, this whole endeavour – as well as all of Liminal 11 – came out of the grand scheming (and I may even say visionary) brain of my now business partner Darren Shill. After seeing a comment on my website, in which someone said that I should create my own tarot deck, Darren sent me a very kind but ill considered email (or so I thought at the time!). He basically said that he would happily fund the creation of the tarot deck, acting as a sort of patron, then I would be free to take it to publishers. Or, alternatively, he would help me produce and distribute it.

It was the potential for work, and as a freelance author/artist I had to respond, but I very much felt that, in time, Darren would realise that there is a reason that the act of being a patron to an artist has died out in our modern world. So I said that I would be away for the summer and perhaps we could pick up the conversation upon my return.

In early September 2017 we met (not for the first time ever, as I had known Darren for many years off and on) and realised that we both had aspirations to start a publishing company and we both had a deep and life long interest in all things mind, body, spirit. And the rest is Liminal 11 history. There is more to this story but perhaps that will have to wait for another post!

Here is Darren (left) and myself (right) looking rather pleased with ourselves. More than half a year in, I am delighted to say that we still feel the same! 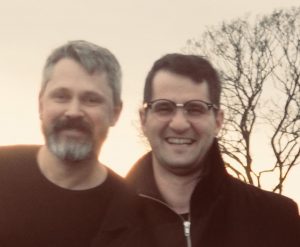 Over the following months, along with getting the publisher up and running, I also delved deep into tarot lore. My knowledge of the tarot was extremely limited before this project, and I must admit I had very limited interest in divination. But I did know, quite instantly, that making a tarot deck would suit me very well and I know I could get on the wavelength.

Here is a selection of the books I pored over in preparation: 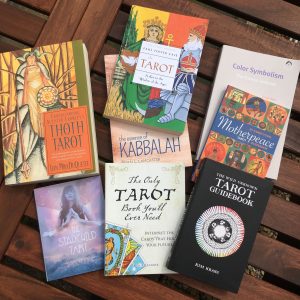 After reading, researching and making notes on each card, then taking a break for the holidays, I came back to a new year ready to dive into drawing. I started at the very beginning, drawing The Fool first, then working my way systematically through the major arcana. Since the first 22 cards are a visual representation of an individual’s spiritual journey, it made sense for me to go on this journey as I drew.

And it was a journey! Truly. A journey that took me deep into my very being and through the darkest parts of myself, but always moving towards the horizon. Distracted by The Chariot. Enlightened by The Hermit. Tempted by The Devil. Given a respite by The Star. Guided by The Moon. Led by The Sun. And, finally, released by The World. Let free of my limiting ego and individuality into the abyss of selflessness and love. What a ride!

Between January and May 2018, I would have regular talks with Darren and we would discuss each individual card. I would start with a simple (and often very messy) thumbnail drawing just to get the shape and balance of each image.

Here are the thumbnails for most of the major arcana: 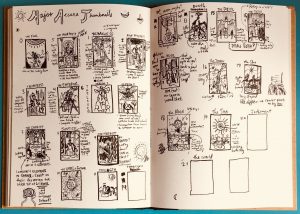 Then I would pencil an image – one a day, usually in the morning – and send that to Darren to discuss. I could usually only draw in the morning. By the afternoon, I wouldn’t have the mental energy so would just ink and colour.

Here are some examples of my pencils. I use blue pencil as I can easily remove it later on in Photoshop: 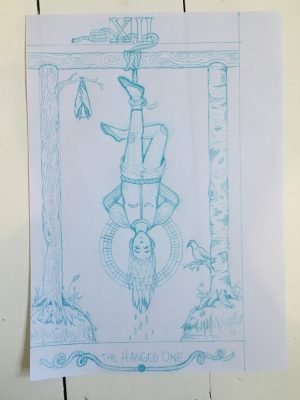 Kay’s pencil for The Hanged Man 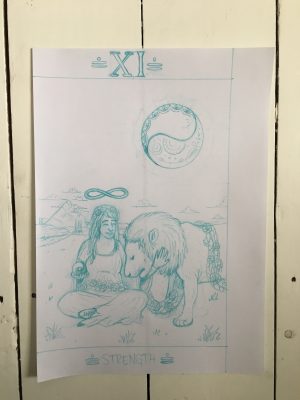 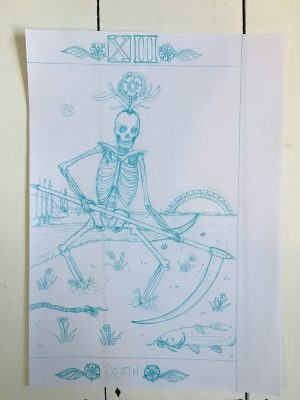 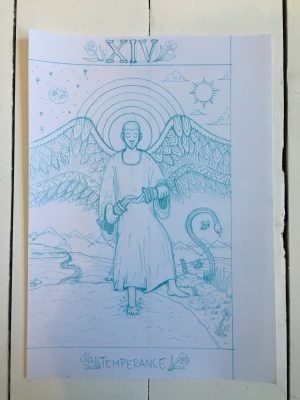 Once we were both happy with the images, I would ink them using a fineliner. Then I would scan and colour the images digitally using the Adobe Photoshop.

Then I would try to recuperate my creative energy and begin again the next day!

There is probably a lot more I could say – delving into the decisions of each image – the emotional rollercoaster that occurs whenever I create a big project on a strict timeline – the inevitable heartbreak when you finish that final image and realise that the project is no longer yours but now belongs to the world… But I think it hasn’t nearly been long enough since completion for me to reflect on any of these things with any sort rhyme or reason.

So I will leave you with this rather silly bit of trivia. This photo is of the very first line I drew when starting the whole deck! 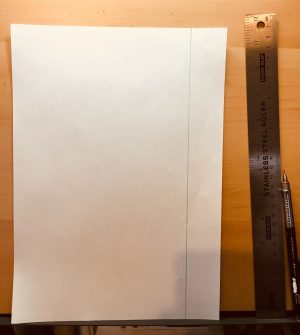 Every new tarot deck must start with a single line…

The Luna Sol Tarot is out this Autumn and I hope you enjoy it! You can sign up for the Liminal 11 newsletter to be informed of when the pre-orders will open and also get exclusive first peeks at new images from the deck. And be sure to keep an eye on our Instagram, Twitter and Facebook for lots of great Liminal 11 art!