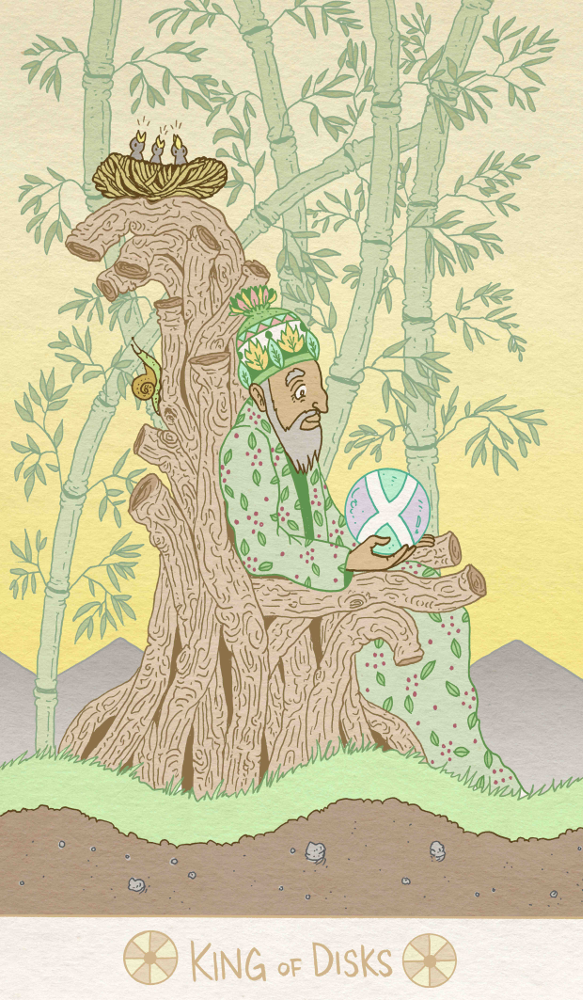 The King of Disks in the Luna Sol Tarot

As the first Court card to be revealed in the Luna Sol Tarot, there are a few things within the King of Disks that you would not notice unless the full deck was laid out before you. However, seeing as you’ve taken the trouble to read our blog, the least I can do is share some secrets! But first, some basics:

When you first look at a tarot deck, some of the most welcomingly familiar cards are the Court cards. The King, Queen and Knave of traditional playing cards are reflected in the King, Queen and Page of the tarot, plus an additional Knight, which would also have been a feature of playing cards in the 15th century. Four suits – again familiar – but in the tarot these are Wands, Cups, Swords and Disks. So there are four types of court cards in four suits – if you read our blog on how to memorise the tarot last week, then you know where I am going here…

The four suits represent the four elements: Wands = Fire, Cups = Water, Swords = Air and Disks = Earth. This again is symbolic; on a simplified level, Fire represents creativity and the will, Water represents the emotional world, Air the mind and Earth the practical world of business, finances and the home.

The same can be done to the Court cards: the Page is Earth, the Knight is Fire, the King is Air and the Queen is Water. This provides a way of quickly understanding each and every Court card. For instance, the King of Disks is Air of Earth. Put another way, it is the intellectual aspect of practical matters. 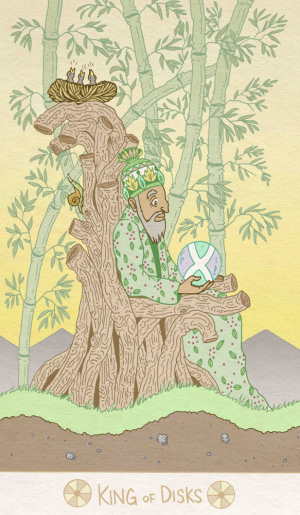 The King of Disks reminds you to be generous with your time and ability to support.

When doing a tarot reading, some view the Court cards as actual people appearing in the querent’s life. Maybe a friend, lover or work colleague; maybe the querent themselves. In this aspect, Kings and Queens are often authority figures such a boss or an influential person. They could be equally be a parent or mentor.

In the King of Disks (‘disks’ are sometimes called ‘pentacles’ or ‘coins’ in other decks), we have someone who is both very hardworking and very successful. That success has been truly earned, perhaps with much long-term planning. They may display wealth – this is, of course the Disks – but it is not necessarily in a showy way, rather that they are generous in nature and like to pass their wealth around in times of need. In this card, there is a strong home connection and ability to provide. Look to the nest sitting on top of the throne, and the hungry mouths within. There is also a very practical aspect – if the King of Earth were a parent, they would probably be pretty handy around the house. Notice the fast-growing and incredibly versatile bamboo that grows behind the woody throne. You could build a home, furnish it, heat it and feed the occupants all with one plant. What better symbol for the supportive, hard working and reliable King of Disks? 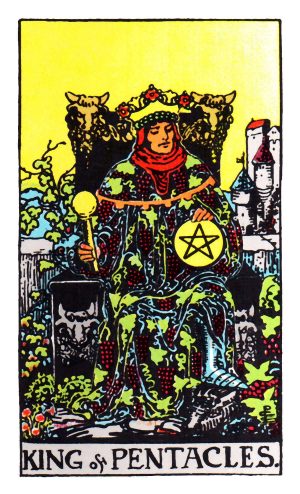 Pamela Colman Smith’s classic interpretation of the King of Pentacles

What you can’t you see from this card alone – which I hinted at earlier as being unique to the Luna Sol Tarot – is that if you were to lay out the four Court cards in each suit, their backgrounds would connect to form one scene. This is a nod to the fact that ultimately they are each one family or group and the interaction between them is a key point. Secondly, the order of the cards is King then Queen, not Queen then King as it is in most traditional cards. After the first shuffle of the cards, you might potentially lose sight of that important fact. The last thing to note is the way the King faces. Does he face the Queen, or does he face the Realm, all the proceeding cards in the suit? As for the Luna Sol Queen, she always faces you.

A conscientious, trustworthy and successful individual is of influence in your life. If you are the King, it is time to help others in whichever way you can. Be generous with your time and ability to support.

If you spot Kay or myself roaming the festival, please do stop to say hello – you’ll be handsomely rewarded with a free exclusive postcard with an image from the Luna Sol if you do!