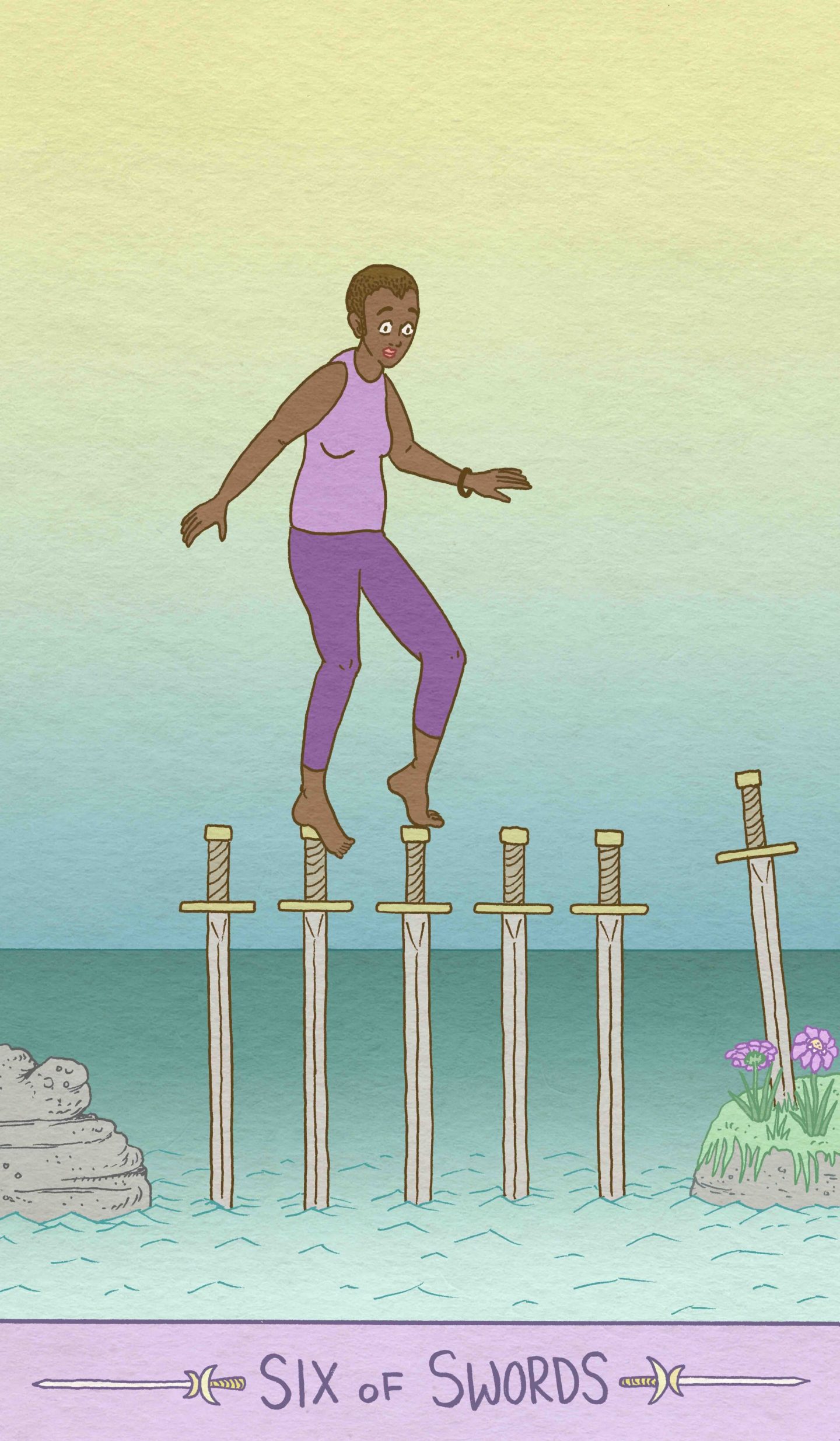 6 of Swords in the Luna Sol Tarot

The suit of Swords is not always looked on kindly by tarot readers. Maybe this is repaying the favour, as Swords represent the element of air, the realm of the intellect, and as such can at times be emotionally cold, perhaps even verging on the cruel. And maybe we feel a little bias when borrowing the Eastern concept that the intellectual mind is something to be overcome in our spiritual development (which is strange when you are told the Ace of Swords is probably the most spiritual of all four Aces). Either way, it is not uncommon for a reader to occasionally wince as if sliced by the card when a Sword appears.

Not so the 6 of Swords. It isn’t the best of circumstances: a sad departure in the Waite-Smith, a delicate transition in the Luna Sol Tarot, but it speaks of necessity and bright horizons. In the Minor Arcana you won’t find an unhappy 6. These cards have a harmony and balance, something of a direct reflection of the sixth sephiroth on the Tree of Life, Tipherath. 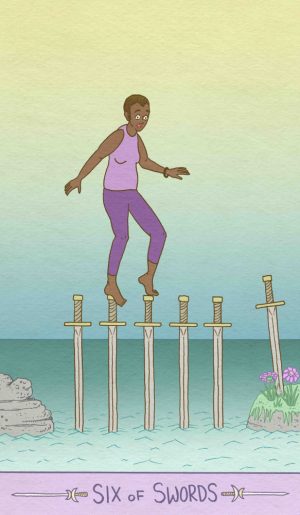 In the Luna Sol Tarot a person steps, carefully, over 6 swords which act as unusual path between two islands. The island that has been left is rocky and bare, the one approached fertile. The final sword is planted in the new home.  There is a mixture of concentration and trepidation about the traveller, which is hardly surprising as she balances on the sword pommels, treading a precarious path. When you appreciate the swords represent the mind the meaning naturally unfolds. The person is moving between two points in their life, perhaps a new home, job, stage of education or relationship. Some care and concentration are required to ease the transition and maybe some focus of thought to not dwell to heavily on the past. Look to the sword sunk in the flowering earth ahead. The space being moved from has served its purpose and – whilst perhaps difficult to leave due to the memories it lives within (not all of which are pleasant if we are truthful) – vision should now be cast to the horizon.

Tipherath is the Sun, a joyful thing. But it is also the Sun which sets at the end of a long, eventful week. In the 6 of Swords we balance a certain melancholy with a renewal of optimism and hope.

Transition from past troubles to a new destination. Let the mind lead the heart when making decisions. There is reason for optimism in the future.

Ok, it’s a tall order. If someone told you you had to memorise 78 objects and then recall them before friends and, occasionally, strangers, that might be a source of anxiety! Of course, no one’s judging – really, they’re not. Your friend will know you are starting out and there is nothing wrong with referring back to a trusted book. I’m sure if you were the friend being read for you would have no problem with someone checking in with a guide (something we advocate in 7 Tips for Becoming a Better Tarot Reader). So if that is not an issue, why bother memorising the cards?

It comes down to intuition. If the meaning is being recalled from your mind, you are more likely to sense the meaning that is right for the circumstances rather than reading a passage and hoping it fits. Remember, each card may have many different meanings, especially when the Major Arcana appears. It much easier to construct the story of the card spread if you are not piecing it together from set passages. When it comes from your memory, you’ll find yourself introducing the next card whilst explaining the current one – you can see the interaction easier. The process becomes one of looking at the facts, applying a little memorised knowledge and then following the gut and heart.

Now for the how! Break it down. You may want to start by just learning the 22 cards of the Major Arcana. There is absolutely nothing stopping you from giving a full tarot reading using just those cards. That’s how I started, and it worked perfectly fine for me. Remember, memory can be best jogged by the association of an image to the word you wish to remember. The tarot happily provides those images, all you need is the association. Yes, this is a wonderful opportunity to learn some classical symbolism, especially in the Majors, but do try let these associations also be personal – that’s what makes a reading done by you so unique! I remember doing a reading for a professional tarot reader once and my calmness just evaporated into nerves as I feared judgement of my ability. She knew I was looking for feedback at the end, so she paused and said, “Well that wasn’t how I would have interpreted those cards. But actually, it felt very true.”

No two people are going to see the same card exactly the same way, even though they may be going back to the same symbolism, and it doesn’t matter. When you are doing the reading with your cards all that matters is what you sense at that point in time. 5 minutes later you are completely entitled to see the card in a different way. And, depending on the other cards in the spread, indeed you should!

The heavy leaning on classical symbolism drops a bit when you come to the Minor Arcana. Now you can focus on what kind of thing the card is explaining (i.e. Wands – broadly creativity and and projects; Swords – the mind; Cups – emotions; and Disks – finances, work, home. Then apply that to type of energy you might see in the number the suit you have drawn. For example, Aces generally signify the start of something and the core essence of the suit, so an Ace of Wands might be the start of a creative project whilst the Ace of Cups might be the start of a new relationship. Sometimes numbers might be generally positive with one bad exception. You see this in the 9s, which relate to the natural end state for the suit (10s being one step beyond) – normally that suggests a good situation. But that’s not the case for the 9 of Swords, a card of anxiety and nightmares. When beginning, your job will clearly be easier when reading a deck that uses a narrative approach to the Minor Arcana, like the Waite-Smith or the Luna Sol. If the card tells a story, rather than just showing you 6 abstract, dangling swords, then all you need do is say what you see. 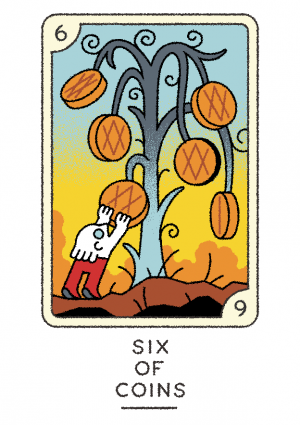 Finally, the Court cards. There are just four main types to remember. Pages, which are generally a younger or less experienced person; Knights, who are messengers, travellers, someone with a little fire in their belly; Kings, people in authority, leaders; Queens, also people in authority but with a more emotional quality. Again you can apply the Suit to see the person more clearly, but there is an elemental trick we can use to really get to grips with the cards. Remember, Wands = fire, Cups = water, Swords = air and Disks = Earth. We can do the same thing to the Court cards – Pages are earth, Knights are fire, Kings are air and Queens are water. So the Knight of Wands is fire of fire, that’s going to be a brash, opinionated person with plenty of creativity and will power, whilst the Knight of Cups is water of fire, with more of a Lancelot vibe, chivalrous, romantic, perhaps a little vain. You can see how combining the two elements gives a good sense of the person and, as a bonus, makes it all much easier to remember!

Hopefully this helps you as you learn the 78 cards of the tarot! Guide books are there to use as much as you need, as long as you need, and they will always be there to support you. Take your time, but don’t be daunted, memorising the cards is both worthwhile and well within your reach!