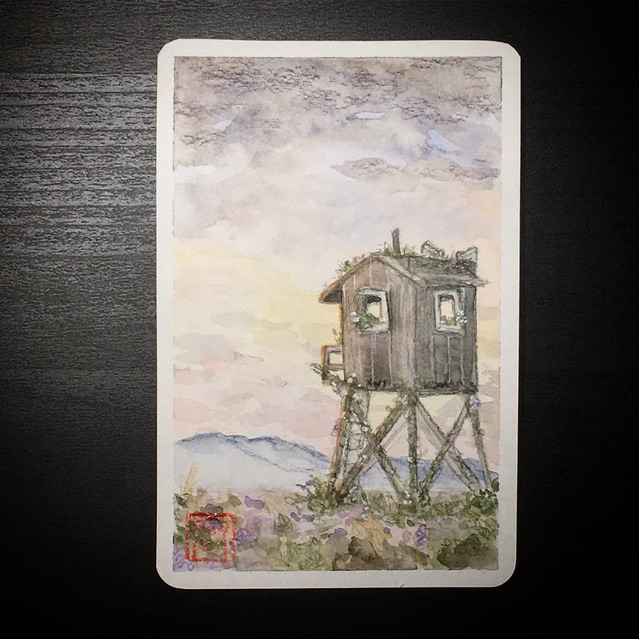 The Tower by A Miyako M

The Tower from A Miyako M’s Major Arcana

During the last few weeks, we have principally focused on individual cards from Kay Medaglia’s Luna Sol Tarot. This week, I wanted to look at a single card from someone else’s deck: The Tower by Addi Miyako. Addi, from San Jose, California, finished a successful Kickstarter campaign in early February this year for a deck of 22 Major Arcana, all rendered in stunning water colours. This Tarot deck came either with velvet bags or furoshiki wrapping cloths, the latter produced by a local San Jose business, Nichi Bei Bussan.

Addi’s cards are mostly close-up portraits of individuals bearing the essential essence the tarot archetypes. There are two notable exceptions, however: The Wheel of Fortune, where a hand tattooed with many of the traditional symbols holds a beautiful coloured wheel adorned with cyclical markings. 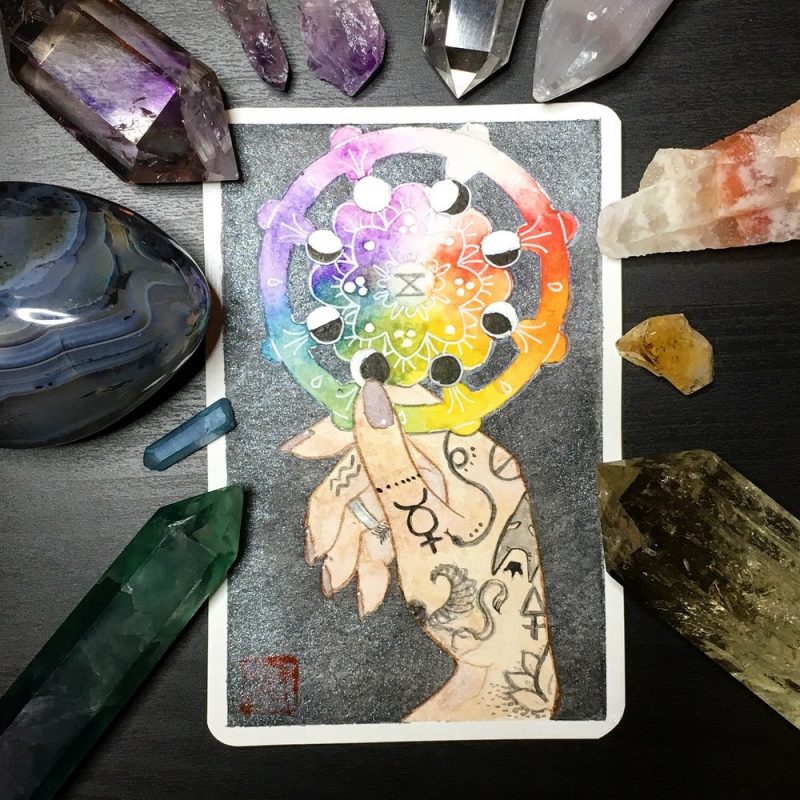 The Wheel of Fortune from A Miyako M’s tarot deck

The other is The Tower, a simple wooden structure standing alone in sparse surroundings. It was a remarkable and deeply personal update regarding this card that – with Addi’s kind permission – we would like to share.

A brief Q&A with Addi Miyako follows after her guest post, picking up on some general background to her deck.

The following originally appeared on A Miyako M’s Kickstarter campaign on 23 February 2018:

Hello everyone!  Wanted to share an off-schedule update with a bit of family history.

The Tower from A Miyako M’s tarot deck

You may have noticed that my interpretation of The Tower is a little different from traditional depictions. When creating this card, I chose to feature the guard tower from the Topaz Japanese Internment camp. This is the camp where my grandmother was held from 1942 to 1946. More than 110,000 Japanese-Americans were interned in the camps during World War II.

As many of you know, I worked with local shop Nichi Bei Bussan to acquire the fabric for the furoshiki wrapping cloth.  Earlier this week, we purchased 13 yards, and my mom will be helping to make the cloths! 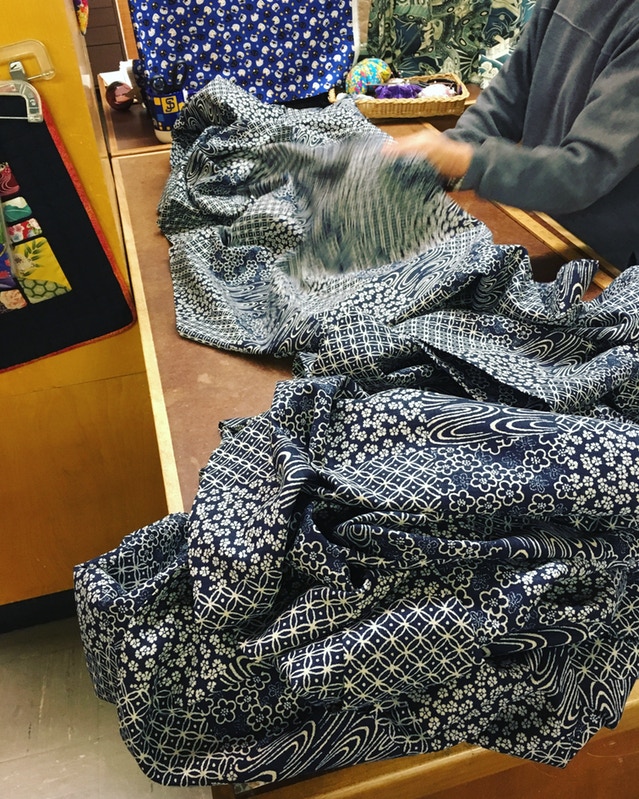 Counting, double-counting, triple-counting to make sure we got it right!

What do these have to do with each other?

The family that owns and operates Nichi Bei Bussan also has ties to Topaz; Mr. Tatsuno and his family had been interned in the same camp as my grandmother. In fact, our families had interacted quite a lot! I only recently learned that my great-aunt (my grandmother’s sister) had even worked at Nichi Bei Bussan, and Mr. Tatsuno used to join our family for traditional New Year’s celebrations. 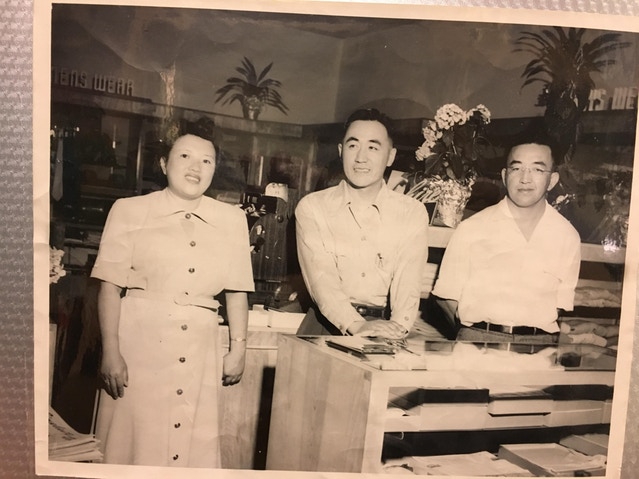 From left to right: my great-aunt, Mr. Tatsuno, and my great-uncle at Nichi Bei Bussan

Earlier this week, our community held the annual Day Of Remembrance, which marks the anniversary of the signing of Executive Order 9066 and the beginning of a forced removal and incarceration of Americans of Japanese ancestry, like my grandmother and the Tatsuno family. This moment in history threw thousands of lives into sudden, disastrous chaos – much like what The Tower card can represent.

Especially in today’s political climate, both in the United States and globally, I hope that we can reflect on the mistakes made in history and never repeat them, that we remember not to let hatred and fear blind us or steer us down a path of intolerance.

When I painted my first cards – The Sun and The Star – it was because I was sought optimism, hope, and positivity during a dark time for our country.  My sincerest wish is for my cards to bring all of you the same guidance, introspection, or whatever it is you need during times of struggle.

We thank Addi for letting us share her family history and the story behind her card, The Tower.

Addi’s Kickstarter has now finished, but we wanted to pose a few questions to her to find out a bit more about the deck and the process she went through:

LIMINAL 11: How did you find Kickstarter? Any words of advice to any of other tarot creators looking to crowd fund?
Addi: I myself have backed several projects on Kickstarter, so when it came time to launch my own project, it was the obvious choice! I’m a bit of an over-planner and love being organized, so I would advise any first-timers to spend at least a week plotting out your timeline before launching. I’m talking high-school-syllabus levels, like “Week 1 update, Week 2 update, Week 3 deadline for this task”. Give yourself extra time on delivery in case there are hiccups, and break down your costs down to the penny – it can be easy to get caught up in the excitement and want to offer lots of extra add-ons or stretch goals, but if you make your project too complicated, you’ll only stress yourself out with managing the details (and possibly going over budget).

Finally, schedule to communicate with backers (my pattern is once a week, or immediately if there’s an emergency). I’ve been on the backer side of a Kickstarter that had months of radio silence, and it’s not a good feeling. If something happens that slows down the process, let backers know right away – they will appreciate the transparency and be understanding. 🙂

Will your Major Arcana be available to those that missed the Kickstarter? How can they get a copy?
There will be a limited number of decks available, both on my website (amiyakom.com) or at in-person events like fairs and conventions. I do plan on redesigning one of the cards, so this particular deck would be limited edition! After the first edition sells out, I hope to continue producing the deck on a pre-order basis.

You mentioned on the Kickstarter that you were probably not going to move on to the Minor Arcana. Any more thoughts there?
When I first launched my Kickstarter, I had just finished pouring months of work into painting the Major Arcana on top of working full-time. I was eager to move on to other projects and explore new ideas, and admittedly felt a lot of creative fatigue from painting the cards. Now that I’ve had a bit of time to recover, I feel more open to it – but it might not be for a few years!

How do you feel about just using the Major Arcana for divination?
I think using a Majors-only deck is a really gentle way to start tarot for beginners, since these cards can provide a lot of high-level insight. Though every person has a preference, I think focusing on the Major Arcana leaves a lot of room for building and strengthening one’s intuition.

Watercolour is an unusual medium for the tarot. How do you think it affected your approach to the cards?
Watercolor as a medium is a bit unforgiving. While there are certain tricks and techniques for manipulation, as an artist it’s largely an exercise in acceptance; the colors go where they go, sometimes in a direction you didn’t want them to, sometimes too vibrantly or blending in unexpected ways. I think sometimes reading tarot can feel like that! You can ask the cards for clarification, but for the most part they will tell you how it is, whether you like it or not, and you have to come in with an open mind.

Plus, for someone who likes structure (see: hyperorganized over-planner!), it’s one of the few spaces in my life where I can be in the moment and feel at peace.

Aside from your wonderful and personal approach to the Tower were there any cards that particularly resonated with you and why?
Gosh, I really poured my heart into each one, it’s hard to pick favorites!

The Strength and The Chariot feature two original characters of mine that embody the values of these cards. I brought the two together in The Lovers, while paying homage to one of my favorite Art Nouveau pieces, Gustav Klimt’s “The Kiss”. 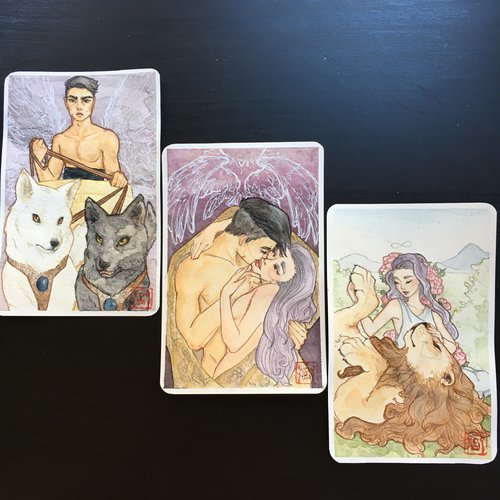 Death is also a special card. I had begun to struggle with my concepts when I became too caught up in the traditional depictions of the Major Arcana, and I wasn’t looking forward to painting Death. I realized I had strayed too far from the influences that made me happy, so I threw out the traditional design and came back to a creative place that was wholly “me”. Rather than use a skeleton in my design, I chose to use a wolf skull and a deer skull, showing that Death takes predator and prey alike, without prejudice or plan; in the end, Death is our fate regardless of wealth or power. In hanakotoba (Japanese flower language), white chrysanthemums are a standard flower for funerals, as they represent grief, loss, and the purification of death. Sweet pea flowers mean “Goodbye”. Peonies can represent “bravery”, as we must all face change (and death) bravely. 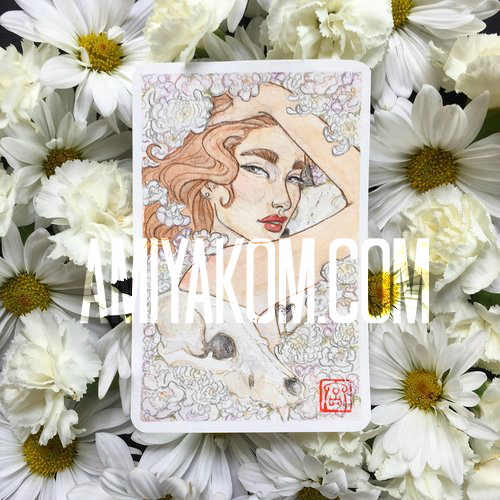 Is there anything else you would like to share?
I’m so grateful to everyone who supported my project on Kickstarter – it was so affirming to know that my art could connect with others globally! I hope that I can inspire others to follow their hearts and move forward with kindness!

Thanks Addi for sharing your story and for talking with us!

Keep an eye on our blog, where we’ll continue sharing previews from our Luna Sol Tarot deck, along with other decks we love – whether they’re well-established or in-production.

We’d love to hear what you think about A Miyako M’s tarot deck, and any other favourites you may have! As always, you can leave a comment or talk to us using one of the social media links below. Please sign up to our newsletter to stay up to date with our projects and all things tarot!